With innovation and ingenuity, Blue Bear School of Music has been bringing musicians together for over 50 years

There’s a hilarious scene in the movie School of Rock where Jack Black is bounding around a classroom, leaping, kicking, playing air guitar, singing parts for the students to play—cajoling them to loosen up and learn to rock as he improvises an arrangement.

What if real-life music lessons and virtual collaborations were actually that fun, joyful, and spontaneous?

Last summer, Blue Bear School of Music—considered by many the original school of rock, jazz, blues and folk—tackled that question head on with this video collaboration featuring Jack Black and an all-star student band of Blue Bear students in honor of the school’s 50th anniversary. 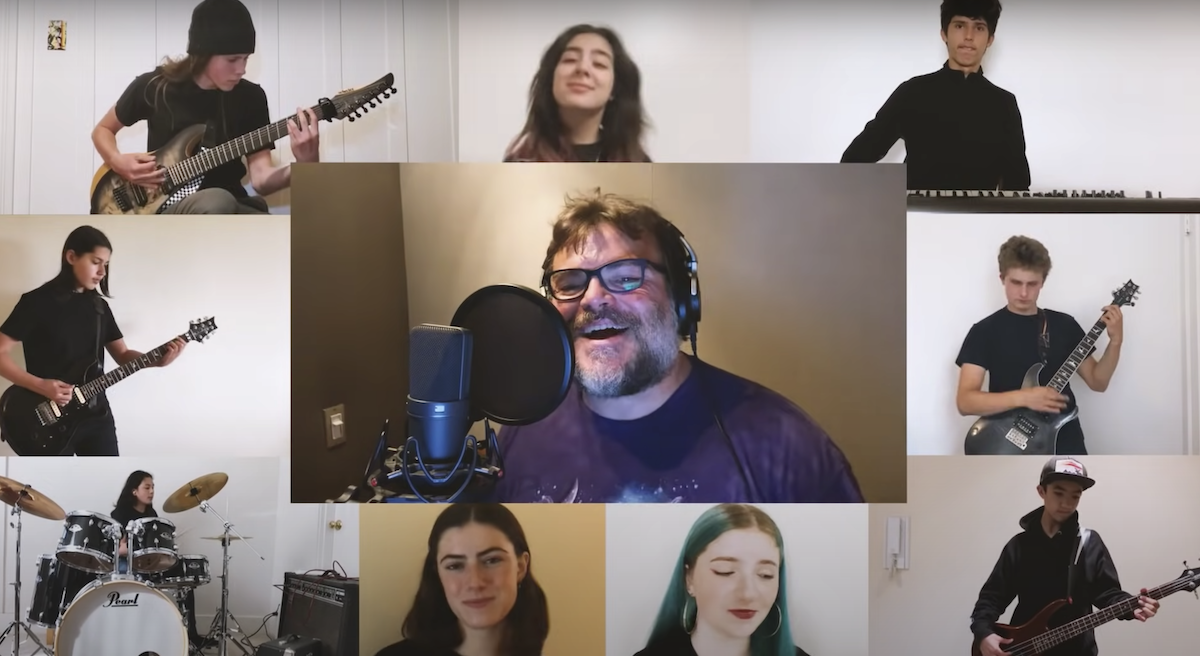 Founded by members of the rock band Wolfgang & Strauss, Blue Bear is a nonprofit that’s provided music education to over 35,000 kids, teens, and adults since 1971. The school’s Program Director Dennis Criteser uses Dropbox to keep important files and archived images organized and easy for the entire team to access.

Eight years after co-founding Blue Bear, Executive Director Steve Savage formed a punk band with one of the school’s earliest students, Bonnie Hayes. Best known for writing the hit songs “Love Letter” and “Have a Heart” for Bonnie Raitt’s Grammy-winning album Nick of Time, Hayes first heard about Blue Bear after her family moved to San Francisco when she was 16.

“We ran into this old friend of mine in the park who told us about Blue Bear,” she recalls. “My brothers and I all started going there to take lessons.”

The Hayes family is a perfect example of the impact Blue Bear has had on the lives of its students. In addition to Hayes’ rise as a songwriter, performer, and music instructor, her brothers also found success as professional musicians—Kevin as a drummer and Chris as a guitarist with Huey Lewis and the News.

“We ended up just having our lives transformed,” says Hayes. “I don't think any of us would be professional musicians without Blue Bear.”

After having a child, Hayes found that life as a pro songwriter—spending all day in the studio, going out for dinner, never going home—just wasn’t possible anymore. She needed work with more flexibility. So she began building programs for Blue Bear that children like her daughter could benefit from.

More recently, Hayes has been working at Berklee College of Music in Boston as Chair of the Songwriting Department—a role that forced her to adapt to remote learning. This fall, she’ll bring everything she learned about teaching music in a more engaging way online back to Blue Bear as Executive Director at their new East Bay Campus.

Though some students and parents found online classes exhausting, Hayes says tools like Zoom have actually helped her interact more directly with her students in breakout rooms.

“We ended up just having our lives transformed,” says Hayes. “I don't think any of us would be professional musicians without Blue Bear.”

“Being able to say, ‘Here's a concept—let's talk about the four contours in writing melody. Take this four-line lyric, go into a breakout room, write a version using each contour, then come back and play them for us.’ This really was an upgrade, because we couldn't work on musical concepts live in a room with 20 people all working on it. So I do feel like, in some ways, the remote learning tools allowed us to have more real-time work.”

Remote teaching has also given her the chance to connect with new students who wouldn’t have been able to make it to the physical classroom.

“When I teach a workshop in Zoom, there are people from all over the freakin’ country in it,” she says. “There's none of that issue we used to have in a classroom, having to make copies of lyric sheets, or have a projector. We jumped over a lot of the logistical and technical problems that used to exist in group teaching. I miss the personal part of in between moments, like talking about the class in random interactions. At the same time, the classes feel like they're working a lot better.”

In addition to expanding access to music education for kids in underserved communities, Blue Bear gives adults a chance to learn how to play in a band, even if they’ve never picked up an instrument before. One such student was Renee Richardson, former DJ at the influential Bay Area radio station, KFOG.

Richardson says when she was working in radio at KFOG, she was always looking to give back to the local music community in any way possible. After the station owners switched formats from classic rock to sports talk, Richardson and fellow KFOG DJ Greg McQuaid launched their own podcast, Renee and Irish Greg’s Pop UP! Then she got a serendipitous call from her friends at Blue Bear.

“The executive director and the chairman of the board at Blue sat me down and said, ‘If you're ever interested in making the leap to the nonprofit world, you should think about being in development.”

After serving on Blue Bear’s Board of Trustees for three years, Richardson took on the role of Development Director to support outreach programs that bring music education to underserved communities in SF.

Though she’d never played bass or written a song before, the enthusiastic, welcoming vibe of the Blue Bear teachers encouraged her to try.

“I think there were seven of us in the class,” she says. “We all submitted ideas, then worked on eight songs that we performed together. It was fantastic. I loved the experience.”

After Richardson became part of Blue Bear’s team, she and Hayes joined forces by livestreaming for the annual Feed The Bear fundraisers. She says adapting to those Zoom-based events helped expand her skills as a presenter.

“One of the reasons I went into radio was to not be on camera,” says Richardson. “Of course, with social media, we had to get more in front of the camera at the radio stations.”

To avoid the nervousness that comes with talking on camera, Richardson says she’s learned to be far more prepared. “In radio, I would sit there reading everything. Now before I go on, I have to think about the flow of where my my thoughts are going and not get distracted by the bird outside the window.”

In addition to getting comfortable on Zoom, Richardson started using Dropbox when she began working at Blue Bear.

“It was really useful to get into the heart of Blue Bear,” she recalls. “When I came on as Development Director, part of my job was to tell the story of the organization. The Program Director Dennis Criteser has been keeping everything in Dropbox. So I could go in and find things from any year, see images of the students that were in the program at the time, and get a sense of who we were teaching and how many people were there. It helped me to absorb everything I needed to absorb, and also repurpose all that art from early on for social media.”

Dropbox also helps Richardson in her role as Director of Philanthropy at Metallica’s All Within My Hands Foundation.

“The Program Director Dennis Criteser has been keeping everything in Dropbox. I could go in and find things from any year. It helped me to absorb everything I needed to absorb.”—Renee Richardson

“Metallica are a machine in and of themselves,” she says. “They work really hard and have an incredible team. Those are the people I need to tap into when I need to get approvals for things to stay on point. I use Dropbox a lot to grab what I need from them, and share with the nonprofit organizations we're working with. So I'm in my Dropbox daily.”

A growing wave of teachers, trainers, and coaches have also been adopting new tools like Dropbox Capture to make remote instruction easier. For Hayes, remote collaboration tools have been essential to her work as a producer for years.

“Early on as a songwriter, I became a producer because I was having musicians play my songs, and they wouldn't play parts,” she remembers. “The music didn't sound right, because they were just doing whatever the hell they wanted. So I started producing to play the parts I wanted because I was wicked bossy and didn't want people ruining my songs!”

As she started producing tracks for other musicians, she found that sharing files was difficult.

“When I started, there was nowhere to store,” she recalls. “Dropbox was the first one. So for me, I was like, ‘This is great!’

It wasn’t long before other musicians were asking her, “How do you do it?”

“One of the things that Dropbox did that really made me stick with them is that they would give me larger storage when I brought in a new [customer]. I had all these clients who I [introduced] to Dropbox. I have two terabytes on Dropbox because of my clients.”

Hayes says she continues to use Dropbox for much more than sharing files with bandmates.

“All my photos, all my music, my session files, all my backups—everything is on Dropbox,” says Hayes. “That includes all my correspondence, my journals, my lyric work. I'm a big Dropbox fan. It’s my peace of mind. It keeps me safe.” 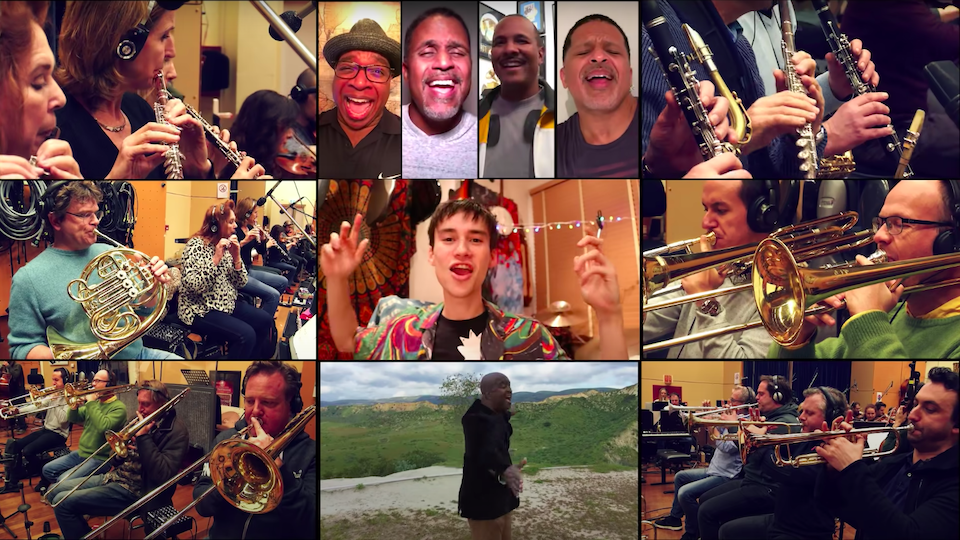 Jacob Collier on managing the complexity of virtual collaborations