“We wanted to immerse our audience in a personal story which also grasped the wider dynamics of its world, to see them keep going, to continue believing things will change."—Sushmit Ghosh

In tribute to teams that bring movies to life, we're talking with producers, directors, writers, editors, and other crew members to learn how they collaborated and completed their films despite the challenges of pandemic lockdowns. Today, we’ll hear from Sushmit Ghosh and Rintu Thomas, co-directors of Writing With Fire, a new documentary, which premieres on January 30th, 7pm MT, at the 2021 Sundance Film Festival.

Dalit women are the most oppressed group in India, subject to poverty, disrespect, and relentless sexual violence that goes systemically unpunished. Yet in 2002, a group of Dalit women founded their own newspaper, Khabar Lahariya, in the Chitrakoot district of Uttar Pradesh, the most populous state in India.

In 2016, Sushmit Ghosh and Rintu Thomas of Black Ticket Films in New Delhi were browsing the internet and came upon a stop animation clip of a woman in a brightly colored sari in a parched landscape delivering newspapers. They were both struck immediately by the image and got in touch with the group, whose main office was a 12-hour train ride away. “Their Delhi office was just half an hour away from us,” says Thomas. “We dropped by and started talking. A few meetings later, they invited us to join a team meeting where they were discussing a shift to digital.”

Scene from Writing With Fire, directed by Rintu Thomas and Sushmit Ghosh With only that much to go on, they headed down to Uttar Pradesh and started filming. Thomas explains, “We were drawn to the coming together of two unique forces—on one hand are rural Dalit women who are chipping away at one of the cruelest systemic discriminations in the world that are created to silence them, and on the other hand is digital technology that by its very nature is unfettered. And we were most interested in exploring what happens when women reclaim the spaces that are designed to exclude them. What does the world they re-imagine look like?”

The result is Writing With Fire, the couple’s first feature-length film. What became clear in that first meeting was that there were three compelling characters in the room. “It is a story about a newspaper in transition,” Thomas says. “This story is experienced through the lens of the paper’s visionary chief reporter Meera, who understands this audacious transition in all its possibilities and complexities. Meera is really a beacon in the film, in the way she articulates a bold vision for our collective future.”

“We were interested in exploring what happens when women reclaim the spaces that are designed to exclude them.”—Rintu Thomas

“A foil character is Suneeta, who's her protégé,” Ghosh continues. ”Suneeta is passionate, fearless, quick to learn but also impetuous. We were interested in exploring how Meera would hone her into an able leader who can directly impact the growth of Khabar Lahariya.”

“And then there’s Shyamkali,” Thomas adds, “who for us embodies the fragility and strength unique to someone who is at the cusp of exploring a world of new possibilities. It was impossible to tell this story without her!”

For what became the next five years, Thomas, Ghosh and co-cinematographer, Karan Thapliyal, made numerous trips to accompany their characters and observe their progress and personal development. “I think this story organically took five years to put together,” admits Ghosh. “We're very happy that we waited it out because it would have been a very different kind of film if we finished in the first two or three years.”

Thomas chimes in, “So our viewpoint was very much, ‘How are they going to build this thing?’ They want to be a digital media agency and how that's going to happen? But we wanted to look at it from within. We wanted it to be a personal, intimate eye because these voices have never been heard so far. They'd been doing this for 15 years, but their personal story had not been told until now.” 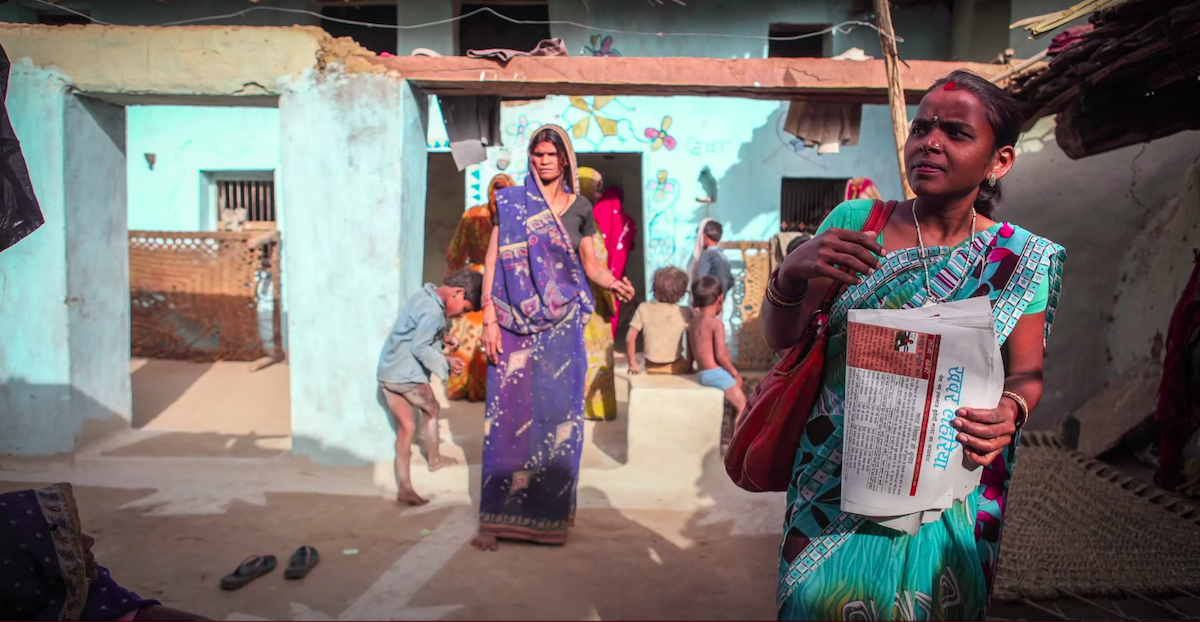 As they entered 2020, Writing With Fire itself became its own story of digital transformation. The directors knew they wanted to finish the film with an international editor. They chose the German editor, Anne Fabini, whose work they both admired. Thomas explains, “Bringing her on board is a different story altogether. The idea was for her to come to India in March, 2020. We'd set up a studio in the mountains and just put the rough cut together. The plan was, Anne would come in and we’d spent two to three weeks together on the early cut. Then, once we were close to the final cut later in the year, we would head to Berlin to picture-lock with her. This plan was firmed up and we booked her travel. Just a week before she was due to be in India, the lockdowns started picking up everywhere, and this whole plan crashed.”

They abruptly changed gears and re-thought their whole post-production process. “We had never edited remotely. Even within the country, while working with editors from different parts of India, we usually fly them into Delhi, because that kind of intimacy in putting something together is super critical for us,” she continues. “Then we were just like, ‘Okay, you know, no choice.’ So then we quickly pivoted. Then every app that is available to just declutter and put a system in place was called into action.”

“We wanted it to be a personal, intimate eye because these voices have never been heard so far.”—Rintu Thomas

They worked scene by scene with Fabini via Zoom calls. They also worked remotely with assistant editors and their music directors. “Everybody was brought on board and quickly jumped on to calls and everything became this symphony of the cloud,” Thomas says, as if it were second nature. “I think the three forces of the internet that we really relied on were Zoom, WeTransfer and Dropbox. They became the arsenal to depend on because we love organization and we love our folders. Different people were accessing different things at the same time. This new universe had a discipline and working between these three apps became our natural workflow.”

Many file transfers later they had a completed film and they obviously made their Sundance submission deadline. But as much as the film is about technology, the filmmakers hope the human story comes through to a global audience. Ghosh admits, “How does one articulate nearly 3,000 years of caste oppression in 90 minutes? We wanted to immerse our audience in a personal story which also grasped the wider dynamics of its world.”

Thomas finishes his thought, “To see them keep going, to continue believing things will change because they are there with their cameras on, challenging people in power who have never seen a Dalit woman with a smartphone. Being Dalit means you are expected to have no agency. You're not even supposed to look at a higher caste person in the eye,” she explains. “To be there with a camera that's looking them in the eye. And to do this in the most non-violent way, you know? You're changing the system with your voice and a cell phone.”

To learn more about Writing With Fire, visit facebook.com/writingwithfire.film

To read more about the making of this year's films at Sundance 2021, check out our Featured Collection. Sundance 2021: How a grand experiment is making the festival more expansive and inclusive

Sundance 2021: Building a New Frontier for a virtual festival experience 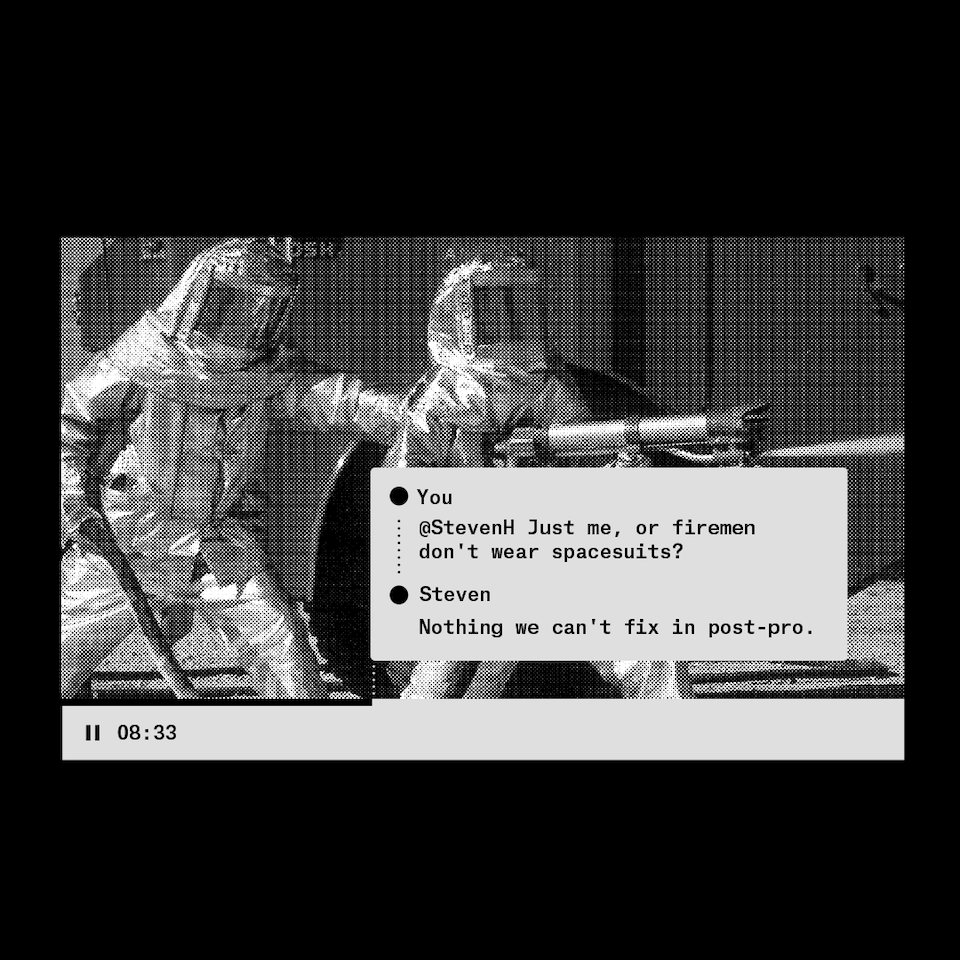 Sundance filmmakers: How technology is changing the way films are made