17 years ago, Joe and his brother came up with an idea to help people make art together. Now HITRECORD is a worldwide hub where you can contribute your ideas to an Emmy-winning web series.

A year is a long time to keep ideas to yourself. Through months of lonely lockdowns, maybe you’ve been at home, hoarding words, photos, drawings, and melodies, waiting for the right time to let them out. Maybe you’re feeling ready to reconnect with others and show them the ideas you’ve been bottling up. If so, good news. There’s a tribe of like-minded people eager to see what’s on your mind.

HITRECORD is an open online community for creative collaboration co-founded by Joseph Gordon-Levitt, the actor and artist best known for his work in movies such as 500 Days of Summer, Inception, and The Dark Knight Rises. As an entrepreneur, he’s had equally impressive success with the Emmy-award winning Netflix series HITRECORD on TV, and the web series Create Together.

But before HITRECORD became a celebrated hub of worldwide creative collaboration, it began as a small, simple project conceived by Joe and his brother, Dan.

“At first, it was just this little personal rallying cry for myself to be creative,” he recalls. “I’d been acting ever since I was a little kid. I stopped for a while to go to college, then dropped out because I just really wanted to make stuff.”

HITRECORD became a catalyst that recharged his creativity and made him rethink the way he viewed his opportunities in the entertainment business.

“I wanted to start acting again, but no one would cast me in anything,” he says. “I realized at that point, ‘Okay, I have to take responsibility for my own creative outlet. I can't just wait around for someone to pick me and put me in a movie.’ I need to be able to make things of my own volition.”

“At first, it was just this little personal rallying cry for myself  to be creative.”

He came up with the name HITRECORD to embody the feeling of wanting to take action instead of waiting for work to come his way.

“There was also a bit of wordplay on ‘hit record’ because of how the media was changing,” he explains. “In the past, a hit record was an object that people buy and turn into hits. Whereas, to ‘hit record’ is what the media was becoming. It was going to be more something to do, something that everybody participated in.”

He was 24 when he first started ‘hitting record’ and making his own short films, stories, and songs with the help of his brother who set up the website. When they put up a message board, a community started to form. Some were curious to see what Joe was making. Some wanted to talk about what they were making. But more than anything, they wanted to make stuff together.

“My brother and I were like, ‘Now, that is really unique!’ That would have never been possible at any other time in history, that someone from Nebraska and someone from the Philippines could actually collaborate in real time like this,” Joe recalls. “We thought that was really cool. So we started leaning into it.”

Soon Dan began building features on top of this message board to help people collaborate—and the community grew. “My friend Jared [Geller] came to me and said, ‘This is amazing what's happening on this little message board, this community that's growing. Do you think we could do more creatively ambitious projects this way?’ I was like, ‘Yeah, I would love to try that.’”

So they sat down and made a wish list of projects they wanted to try—short films, music, books, maybe even a TV show someday.

“That was the beginning of starting as a production company to try to accomplish these things that we had written down in the diner one day,” says Joe. “Then after a number of years, we started ticking off all those things on our list. Our community did collaborate to make short films that played at Sundance and music has been pressed to vinyl. We've had books published. Our first TV show won an Emmy.” And last year, HITRECORD won their second Emmy for a web series inspired by the pandemic: Create Together. 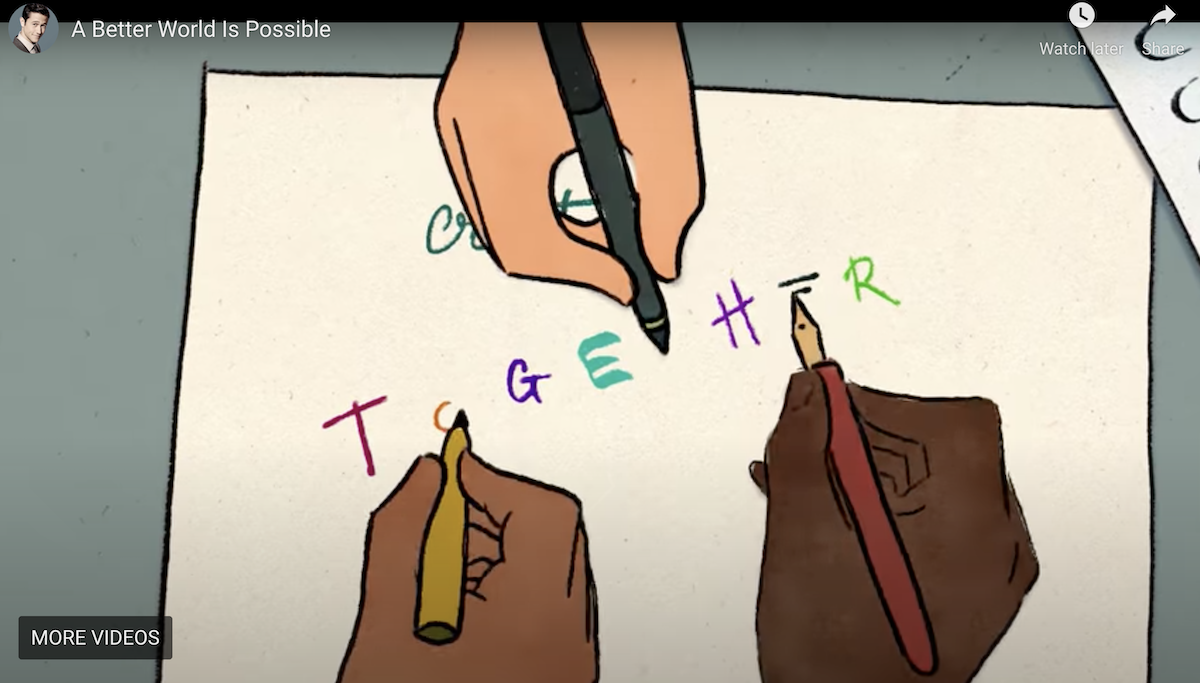 Episode 1 of Create Together Season 2

“My brother and I were like, ‘Now, that  is really unique!’ That would have never been possible at any other time in history, that someone from Nebraska and someone from the Philippines could actually collaborate in real time like this."

Editor Rebecca Votta recalls how much the company has evolved since she first started working there eight years ago. “When I started at HITRECORD, it still felt like it was coming into its own. It was four people in an office. We slowly filled it out with the whole TV crew. We have a whole coding team. It's crazy how much I've seen HITRECORD grow up. But it still has all the heart that was there in the beginning.”

Years before the pandemic made remote collaboration a necessity, Joe had already been creating a space where people could easily come together to contribute their artistic works in progress, remix ideas contributed by others, and build projects together no matter their skill level or where they lived. Joe says it was a concept that’s always been on his mind.

“I started working as an actor when I was six years old. I've been lucky my whole life to get to work in the conventional professional entertainment industry,” he says. “But I have always wondered, ‘How come I get to do this?’ A lot of people would want to do this, and they're not getting to. There are a lot of talented people outside of Hollywood.”

And though technology has made it possible for almost anyone to step into the spotlight, Joe thinks that's been a distraction from the real opportunity.

“Honestly, I think it's put too much emphasis on the spotlight,” he says. “To me, what's really fulfilling and meaningful and what really gives me joy isn't the spotlight. What really makes me happy is actually making something, and especially when I'm doing it together with other people.”

That’s why HITRECORD is working to refocus the conversation about what art and creativity are.

“In the last number of years, the attention economy has exploded,” says Joe. “Instagram, Facebook, TikTok, etc. are all delivering the same narrative and putting what it means to be an artist within the same framework that conflates artistry and celebrity. But those are two different things. If you go back in history, what a celebrity has more in common with is not artists, it’s royalty.”

Though he appreciates moments in the spotlight, Joe says he’s mainly grateful for the opportunities it has afforded him to do creative things he loves.

“That’s one thing I would love to communicate for anybody who wants to make something,” he says. “Whether you want to act or write or make music or draw, it's cool if you want that attention. That's a natural human instinct to want attention. But there is something else. There's more to being an artist. That's something you'll find in yourself.”

Joe says editing is a great example of the kind of work that puts him in a meditative creative mindset. “I could stay up all night editing,” he says. “You might be working with footage in your shot [or] footage someone else shot, but whatever it is, you're just so into it. That moment of just being in the flow of what you're making. That's what we should all be really focused on.”

“That moment of just being in the flow of what you're making. That's what we should all be really focused on.”

Rebecca agrees: “It's the best feeling when you can get into that zone, when you jump into something and start editing. It's this feeling where you're not even there anymore. You're in it, and you're making this thing, and all of a sudden, you realize ‘Oh my gosh, six hours went by! Where am I?’ But that's the part you want to get to every time. It's such an awesome feeling.”

And that’s the feeling Joe wants more people to experience by creating together on HITRECORD.

“We always try to make it accessible,” he says. “A lot of people say, ‘Oh, I'm not an artist, I can't do that.’ In fact, my brother never used to consider himself an artist. He wrote software code. But eventually he did make that decision, like, ‘You know, what—I don’t need to think about myself that way. I could be an artist.’ He started taking pictures, got really into photography, and eventually started doing incredible fire spinning and found a whole other side of himself just because he decided I'm not going to put myself in a box. He always wanted HITRECORD to be that place where someone like him—who doesn't necessarily think of themselves as artists with a capital A—can come in and try some stuff.”

Over the years, Joe says the HITRECORD team found that when you have a community that's making stuff together instead of competing for attention, people feel more open about trying things they wouldn't otherwise. “Because they're not saying, ‘Okay, here's what I made. Now everybody come tell me if you think it's good!’ That’s not really what happens on HITRECORD. It's more like, ‘Hey, we're all doing this together. You can try it. Everyone's trying it. We're all doing it.’ It’s a more supportive thing.”

“We used Dropbox to back up our master exports, transfer footage from Joe’s video shoots, and pass animations and graphics to each other.”—Rebecca Votta

“There’s so much value in the creative process itself,” says Joe. “We all think about the results: What am I making? What will people think of what I've made? But if you take that aside and forget the results, just think of the value and the happiness you get just doing it, just the process of doing it. I think that’s hugely valuable. It gives you life.”

Rebecca says the past year has made her even more appreciative of her job. “I have a lot of friends in the industry, and they haven't been working as much. I love working. I love being creative. So for me to be able to work creatively full force when the world shut down meant a lot to me. It just made me grateful that technology has advanced to where you can do this. It made me realize that again, what HITRECORD was doing. It's like ‘Oh, for reasons like this—we can keep working.’ We can keep doing what we do without a hitch.”

To contribute your own photos, videos, music, writing, and art to Create Together Season 2, go to hitrecord.org/createtogether 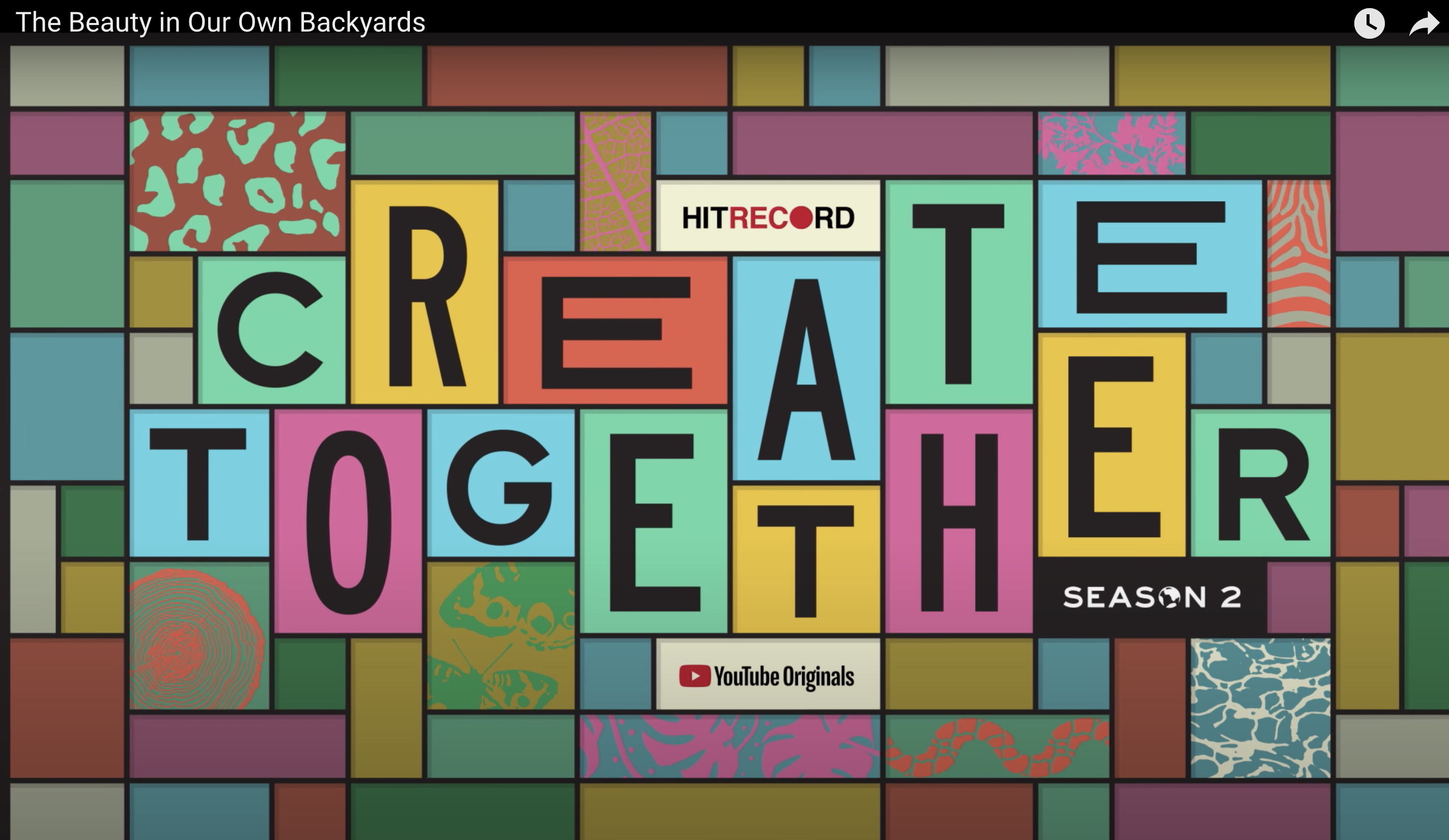 Watch episode 2 of Create Together Season 2 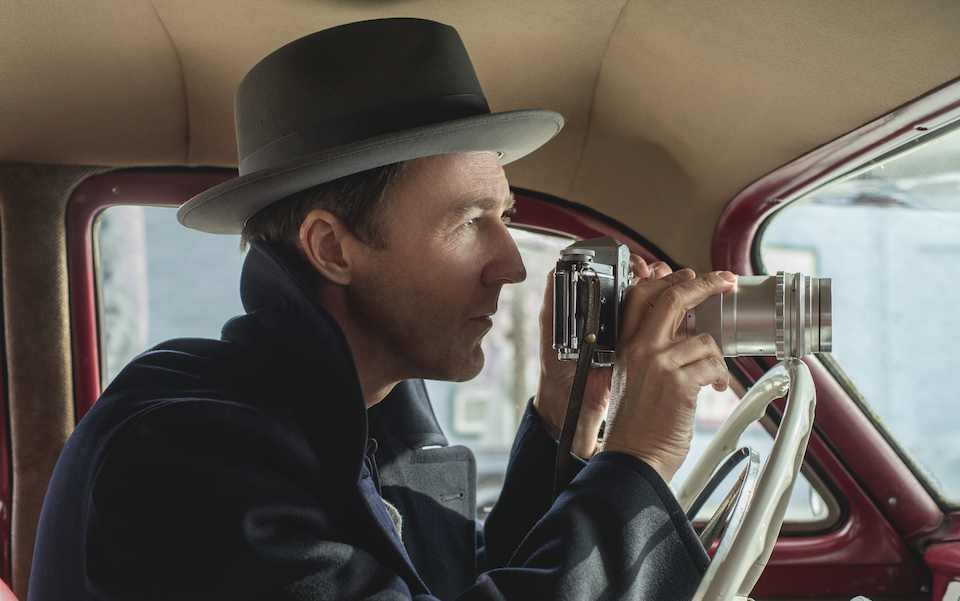 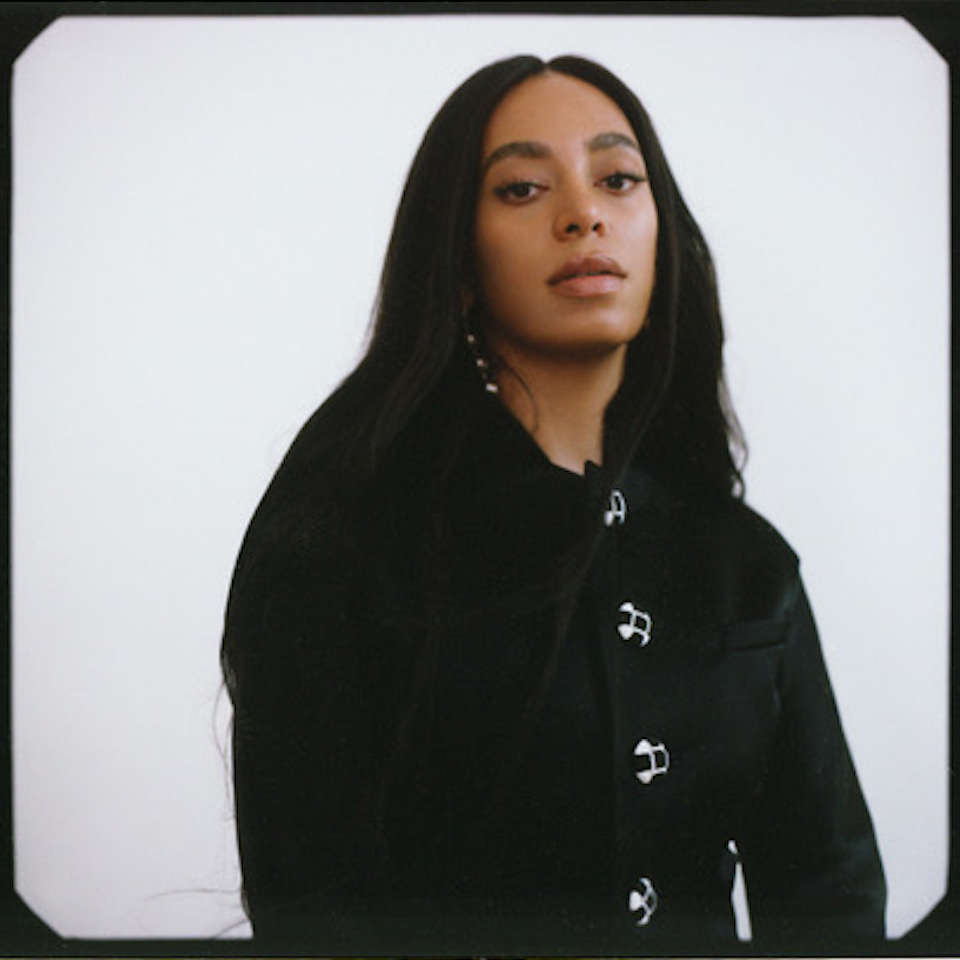 The making of an accidental film about an unintended memoir