Making a film is a complicated act of orchestrated teamwork. Trying to make a movie in New York in under 50 days? That’s the kind of challenge few filmmakers want to take on. 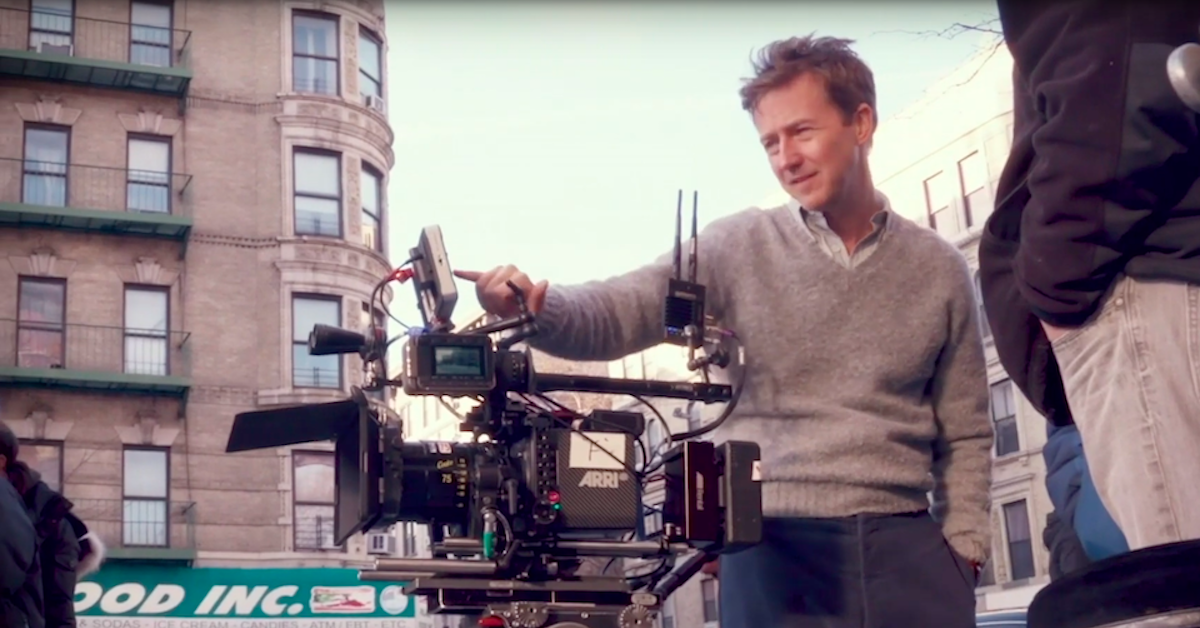 “New York demands a very prepared kind of filmmaking,” says Edward Norton, writer, director, producer, and star of the new film Motherless Brooklyn, based on the novel by Jonathan Lethem.

When Norton first began working on Motherless Brooklyn in 1999, filmmakers didn’t have the collaboration tools that emerged in the past decade. Communicating ideas to all the people helping bring the director’s ideas to life was still a long, laborious process.

“It used to be weeks of sitting with a storyboard artist trying to dictate how to draw a vision of what you want to do,” says Norton. “But these days, with iPhones that have 2k or 4k resolution on them, and tools that ingest an image and then draw on it… you can build the visual narrative in advance in a much more sophisticated and highly specific way.”

Directions drawn on a photo embedded in Dropbox Paper 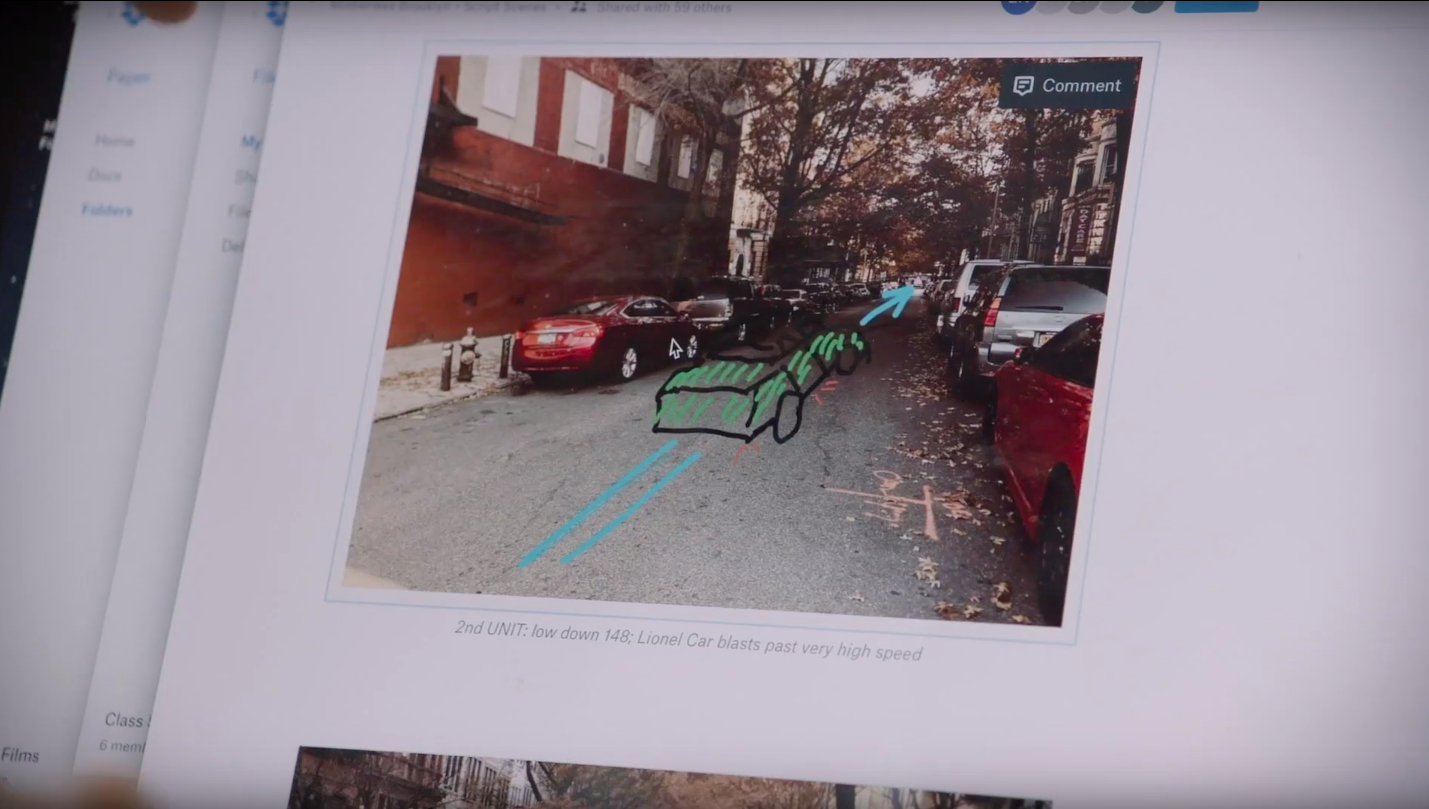 Long a technology enthusiast, Norton is also the co-founder of a data science company called EDO. As any data scientist knows, details can add depth. And for Motherless Brooklyn, Norton was responsible for a lot of details. Being the producer, writer, director and star of the movie meant taking on some monumental multitasking.

So how did one person manage to create, communicate, and coordinate so many details with so many people all at once—all while staying on time and on budget?

"You have to bring everybody into this incredible mindshare together."

“Making a film is about taking a notion that you have in your head, and getting it first onto paper, knowing that’s going to be a limited armature from which you need co-sculptors,” says Norton. “You’re going to bring all these people in—production designers, visual effects supervisors, photographers, costumers. You have to bring everybody into this incredible mindshare together. You’ve got to get a whole lot of people operating on the same frequency wave.”

When he was working with writer/director Wes Anderson on The Grand Budapest Hotel, the two began talking about the need for a “curatorial platform” that would let a director put all the aspects of the visual narrative together in a way that could be easily distributed to everyone on the crew—without having to send large, cumbersome files. 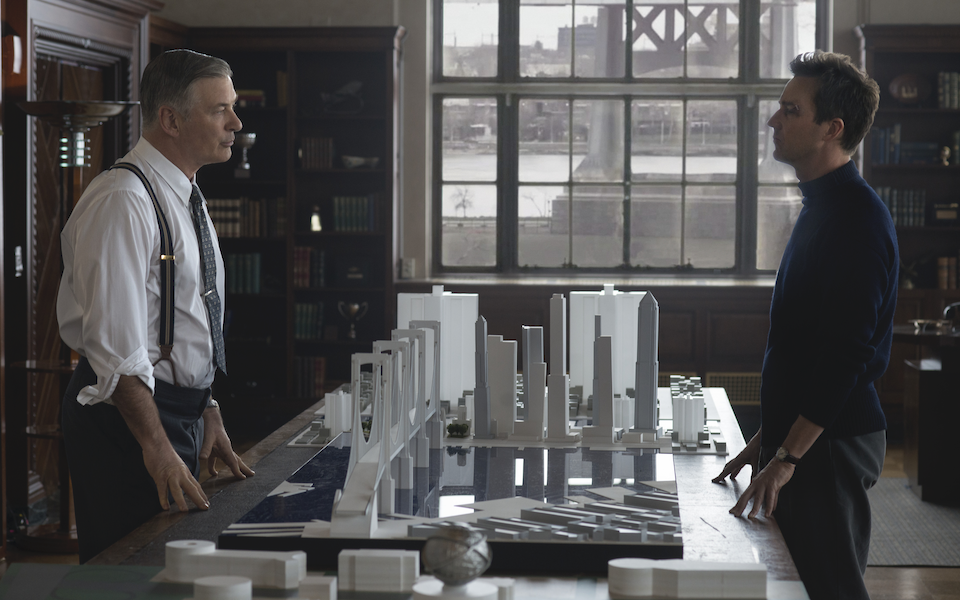 “Many things create efficiencies,” he says. “Other things are so powerful that they open up opportunity. Digital color correction. You say, 'Oh that’s so great. We don’t have to time film anymore.' But you can go so down the hole of what you can do that it arguably makes you want to spend even more time than you used to."

While he was searching for solutions that could serve as a curatorial platform, he called Tim Ferriss, author of The 4-Hour Workweek, to ask his advice.

“He’s always one of those people I call about, ‘What’s the cutting-edge?’ because he’s so dialed into efficiencies,” says Norton. “He said, ‘You should call Drew at Dropbox, because I think they’re doing something new.’ So I called Drew and told him what I was looking for. He said, ‘Oh, that’s wild timing because we’re coming out with this thing called Paper. You should check it out.’” 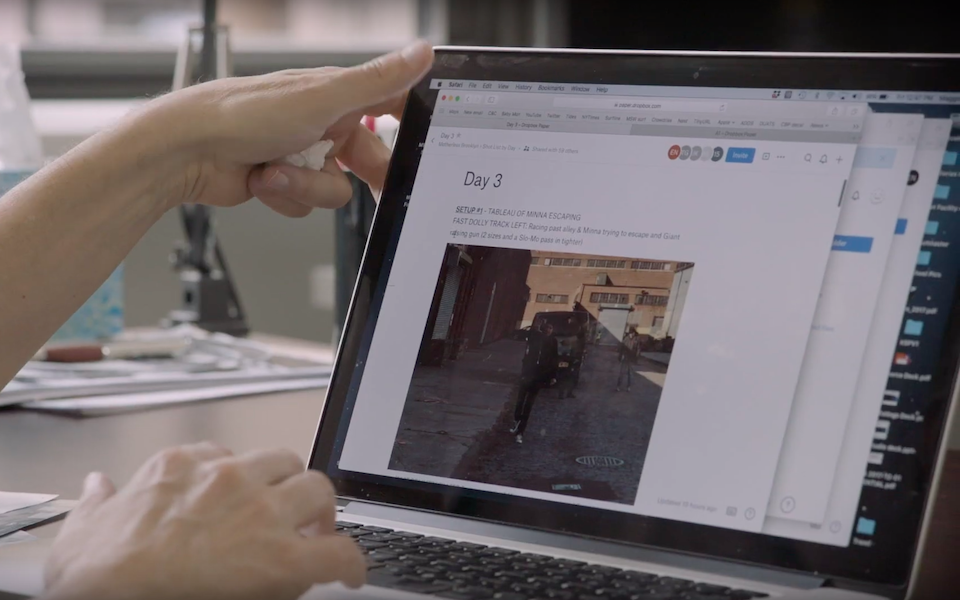 Norton started by building two separate platforms in Dropbox Paper. “I built a platform where I had every scene in the movie,” he explains. “We had about 150 or 160 scenes. That became the vision platform for every one of those scenes. We loaded reference photos that applied specifically to the scene. If there’s a great Vivian Maier photograph of a guy asleep in his news stand, and we’re going to recreate that in a given scene, that’s in that scene’s file.”

"We created a communication workspace. I know it sounds like hardly the most innovative thing to people who are in technology spaces. In filmmaking, it's still shockingly new.”

Norton said his team used Slack as a way to organize group communications, and used Dropbox to give department heads access to folders where they could share photos and videos that were too large to send by email.

“The guys at Dropbox introduced me to the guys at Slack. The integration between that and Dropbox has been very successful,” says Norton. “My visual effects supervisor and I were planning an entire sequence in the old Penn Station, which doesn’t exist anymore. So it’s a complete CGI environmental build integrated with sets. Those are enormous files, even when we knock them down. I was watching it in a car this morning. It was in our Dropbox stuff and pulled it up through Slack. I’m finding these tools really leverage each other in a great way.”

“In our production Slack channels, we’re able to say, 'Hey, there are updates to day 5. Check it.' And link straight through into the Paper file. So people can just touch on their phone, get an update… I’ve been doing this nearly 25 years, and that is a pretty unprecedented experience for me and a lot of other people.” 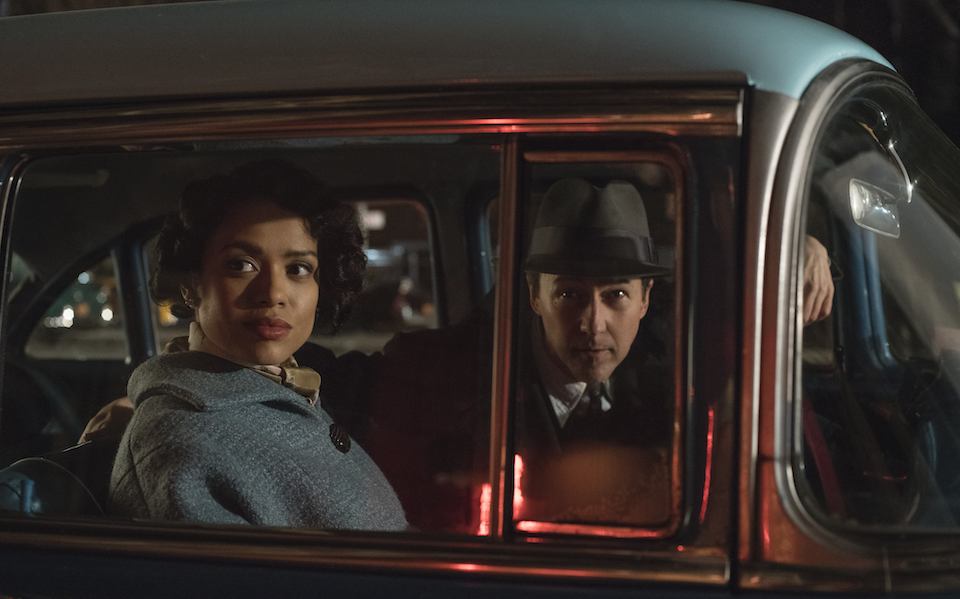 For every scene in the film, they created a Paper doc. “We could put elementally the things that were going into the scene so that other people didn't have to ask questions,” says Norton. “They could go, ‘Well, let me just look at the folder and see if wardrobe’s got their selects in there.’ It’s almost like a collage, so that at least I could look at it for reference to what's in there.”

“It was a nice place to consolidate,” he adds. “But also what we started doing was building our storyboards in it."

Norton says the scene documents became the team’s main reference point. If anyone wanted to see the vision for a particular scene across all dimensions, it was all in the Paper doc. For every day of shooting, they would have the work of the day broken down by shot. 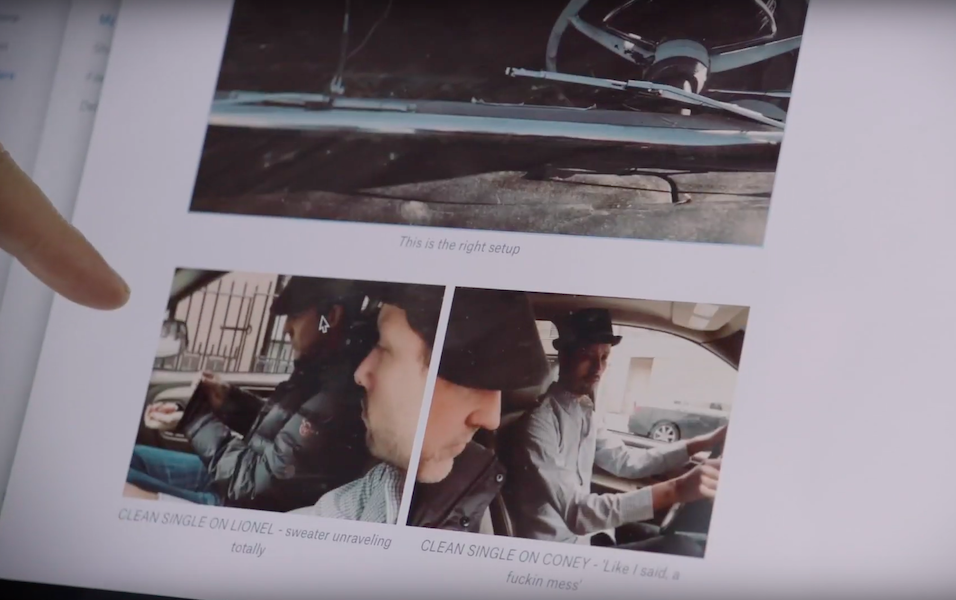 “We had highly detailed shot plans. That's the number one thing that drives efficiency on a film day,” Norton explains. “Anybody could open up “Day Two” and see the planned order of the day… Having a document like that for every day of the shoot that's on everybody in the crew’s phone was fairly revolutionary.”

If there were questions, they could refine the notes in the Paper docs as they went—which saved a lot of time that used to be spent sending emails with updates.

“For me, my first AD (Assistant Director), my DP (Director of Photography), that was priceless,” says Norton. “When I showed the film to certain filmmakers, the assumption was that we shot the film in about 75 days. They were like, “Wow, how the f*** did you get a schedule big enough to do that?” When we told them we'd done the film in under 50 days, people were just incredulous.”

"When we told them we'd done the film in under 50 days, people were just incredulous.”

“We created a communication workspace,” he says. “I know it sounds like hardly the most innovative thing to people who are in technology spaces. In filmmaking, it's still sort of shockingly new.”

“A lot of hard-boiled New York crew came up and said that’s the most information I’ve ever had through a tech scout. A lot of people felt like we did what you normally do for rehearsal at the top of every day. Everyone was able to be standing there together, pre-visualizing what we were going to be doing in a convenient way. That’s been really great. I actually think if we had more time, we could’ve taken this to even another level.”

Dropbox recently introduced Dropbox Spaces as the first step in building the smart workspace of the future. So we were curious—how would Norton envision a smart workspace for filmmakers?

“It'd be amazing to have it be a curatorial space where you can organize all the cake layers of something, and have multiple people responsible for making sure their part of the cake layer is populated,” he says. “It would be cool if you could do things with it almost like tabs, where you [label them] directors, notes, wardrobe, storyboards, so that if someone was going into the document for the scene, they could tab into the specific buckets of the departmental information and it would bloom up. Or you could elect to go “collage mode” where it’s all there, sort of stacked, and you could scroll through all of it… a synthesized total view of where we are in progress.”

Technology has changed radically in the 20 years since Norton began working on Motherless Brooklyn. As AI, VR, and other emerging technologies expand the capabilities of filmmakers even further, imagine what pioneers like Norton will be able to create in the next 20 years.

Edward Norton’s new film Motherless Brooklyn is in theaters now. To learn how your team can use Dropbox as the smart workspace for your next project, check out dropbox.com/smart-workspace.