In tribute to teams that bring movies to life, we're talking with filmmakers to learn how they collaborated to complete their films despite the distance and isolation of pandemic lockdowns. Today, producer Cassandra Jabola and editor Jeff Boyette recall the origin and development of director James Redford’s final film, Amy Tan: An Unintended Memoir, which premieres February 2nd at the 2021 Sundance Film Festival.

Amy Tan has been a renowned literary figure since her novel The Joy Luck Club became a best-seller over 30 years ago. But when James Redford sat down to interview Tan for a new documentary, he was interested in talking about something else. Her rock band.

“The way it came about was an interesting story,” says editor Jeff Boyette. “He was interviewing Amy for another film called Playing for Keeps, about the relevance of having a play aspect to your life, a hobby. Amy Tan came up as this person everyone knew as a writer, but didn't know she also had this hobby as being in a rock band.”

At some point in the interview, Redford’s conversation with Tan took a turn.

“She had just finished her recent memoir, which was a real unearthing of her life and her mom's life,” Boyette recalls. “Then she sits down with Jamie, who just has this incredible skill of building rapport immediately, connecting with people, and giving them space to talk. He's an incredible listener. Every single one of his interviews is like that.”

“Then she sits down with Jamie, who just has this incredible skill of building rapport immediately, connecting with people, and giving them space to talk.”—Jeff Boyette

Though they started off intending to talk about the importance of creative play, it led to an even more interesting path. “They went deep and covered so much,” says Boyette. “This was well before he had the idea of doing a film about her. Yet, that's one of the primary source interviews for the film because it was that pivotal.”

It’s a perfect example of how Redford’s instincts opened up new possibilities. What was intended to be one film turned into two, all because of a conversational detour.

“The title does kind of have a double meaning,” says producer Cassandra Jabola. “It was an accidental film because he started interviewing her for the other film first. Then our producer, Karen Pritzker, had the idea that Amy’s story should be its own film. But also, [the title] comes from Amy. She's written two memoirs: The Opposite of Fate and Where the Past Begins, her most recent book. Within our film, we include a press interview Amy gave about Where the Past Begins, in which she says that it’s an unintended memoir because she started writing a book about her writing process. But she found that when she started writing things spontaneously, they kept reverting back to what had happened to her in childhood, and it became more of a memoir.”

Jabola says she thinks Redford’s biggest strength was connecting with people on a personal level. “He wanted them to be able to tell their story,” she says. “It's important to him to have the characters speak for themselves. He was very kind and empathetic. He just had an ease about him that made people comfortable, which I think is how they were able to open up during interviews.”

Boyette says those traits were evident in Redford’s approach as a director as well.

“It was always a joy to work on films with him,” he says. “He’s so light in the way that he applies the direction and creates his vision. There's never any tension. There's never any drama. For him, it's about getting people in a space where they're comfortable to express themselves and talk honestly. He really had a gift in that way.”

Redford also had a gift for choosing collaborators that had an ability to find personal connections to the story that added resonance to the film.

“He wanted them to be able to tell their story,” says Jabola. “It's important to him to have the characters speak for themselves.” “We had the same composer for both films, but the music is completely different,” says Jabola. “That's an interesting story because it was more about his vibe of working with her, her passion in general, and her connection to both topics—not so much about the fact that she did a certain kind of music for this film. The music for each is completely different. Playing for Keeps has a lot of funk in it. Amy Tan is more classical. There's a lot of piano.”

“Kathryn Bostic is the composer,” adds Boyette. “She’s a pianist. She's rarely asked to do a piano score. So it was sort of a treat for her. We knew piano had to be a big theme, because it's a big part of Amy's life. She’s actually a really talented pianist, and it's a big part of her relationship with her mom.”

“One of our reference points early on when Jamie and I were talking was the composer Ryuichi Sakamoto,” says Boyette. “He has some albums that are kind of pure piano. That was something Jamie had suggested. Lo and behold, we sit down and Kathryn immediately said, “Oh, I couldn't believe you put in that track. I was on tour with him for years!” We had no idea she had had this relationship with someone who was our reference point. So there's a lot of serendipity around her role in the film.”

“It was unbelievable how the score came together as quickly as it did, how truly emotive it is, and how she was able to so quickly connect with the film, thinking back to her relationship with Jamie, and reflect that and connect with Amy and her story.”

“He was so dedicated to making sure the film was finished that he worked on it with us up until less than a week before he passed,” says Jabola. “We all knew he wasn't doing well for about a year. He would tell us once in a while ‘Oh, I can't make this meeting because I have to go to the doctor.’ But other than that, he never brought it into the workspace."

"I always thought that was so amazing," she recalls. "Because even though I haven't gone through it myself, I don't know that I would have been able to keep working as long as he did. He was just so dedicated to us as a team, but also to telling Amy's story. He was just so positive and happy that if you didn't know that he was sick, you wouldn't have known. He kept things very normal, which I think helped him, too. I think that was a choice that he made.”

“He just exudes positivity throughout every stage, every conversation, so you feel very good about the work.” says Boyette. “What was really uplifting was, we’d just got to the point where we were ready to show Amy a rough cut. He was happy enough that he wanted to show it to Amy. Some of the last emails from him were him saying, ‘I haven't heard from her yet. I'm nervous.’”

“He was so dedicated to making sure the film was finished that he worked on it with us up until less than a week before he passed,” says Jabola.

“We did find out that he got an email from her where she just poured out her support and appreciation for the film,” says Boyette. “That was one of the last emails, if not the last email he read. It was a huge deal for us because it meant that not only did we have Amy's approval for the work that we’d done, we knew that he had that closure himself, and it was sort of permission to finish, to know that we were doing it in a way that would do justice to his vision, but also was respectful of the relationship they had together.” 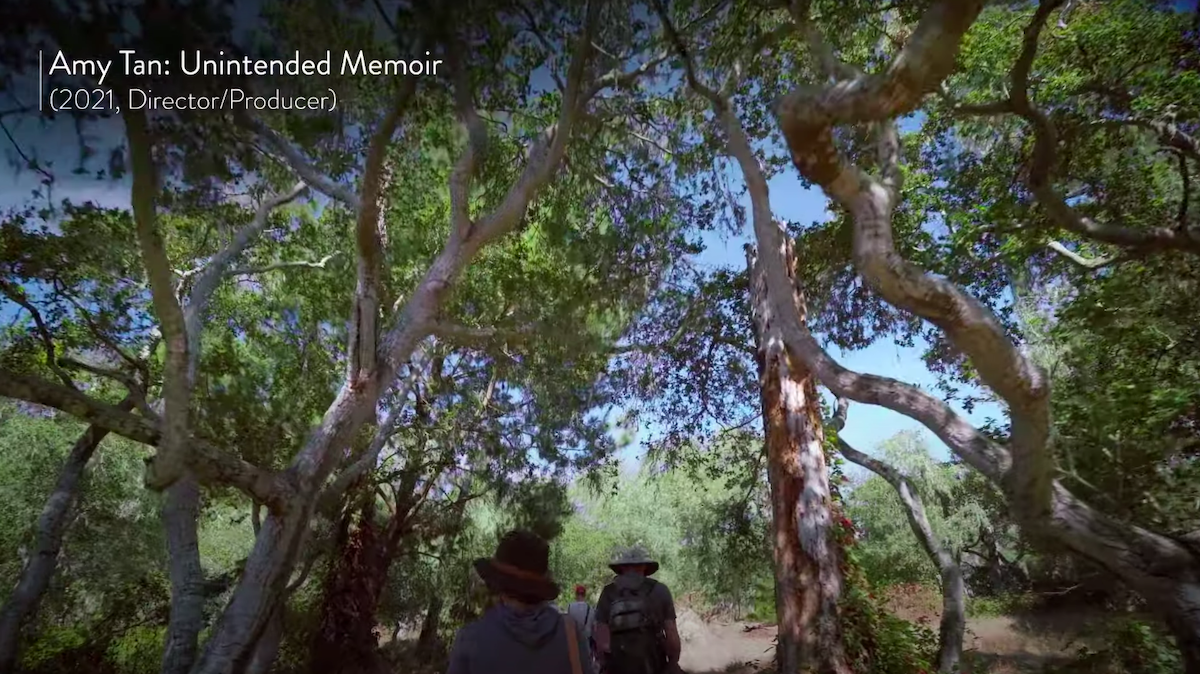