Is pursuing productivity at all costs really better for business? Is it actually what people want?

In part one of this series about the challenges of modern work, we looked at our obsession with productivity, and the diminishing returns of a ‘do more, go faster’ mindset. Today, we’ll explore the interviews and survey insights that got us there.

When we first set out to learn more about the state of modern work, we had a few simple questions. What was most important to knowledge workers when picking a job? Which tasks were the most satisfying? The least? How happy were employees, and why?

After receiving diary studies from 70 workers—and following up with 10 in-depth interviews with knowledge workers from across the globe—it became clear that there was more nuance to the work experience than our questions had first assumed. In reality, every worker we interviewed was busy navigating a series of tensions, and these tensions were central to how happy they were at work. For example, many of these workers were struggling to find the right balance between autonomy and interdependence, and some felt stuck with too much of one or the other.

With these discoveries in mind, we set out to learn more on a broader, more representative scale. We followed up our one-on-one interviews with a statistically significant sample of more than 500 knowledge workers across the US. We asked questions about all kinds of workplace tensions, ranging from working style to values, from collaboration to ethics. The results were eye-opening.

Lesson #1: More workers want to slow down to get things right 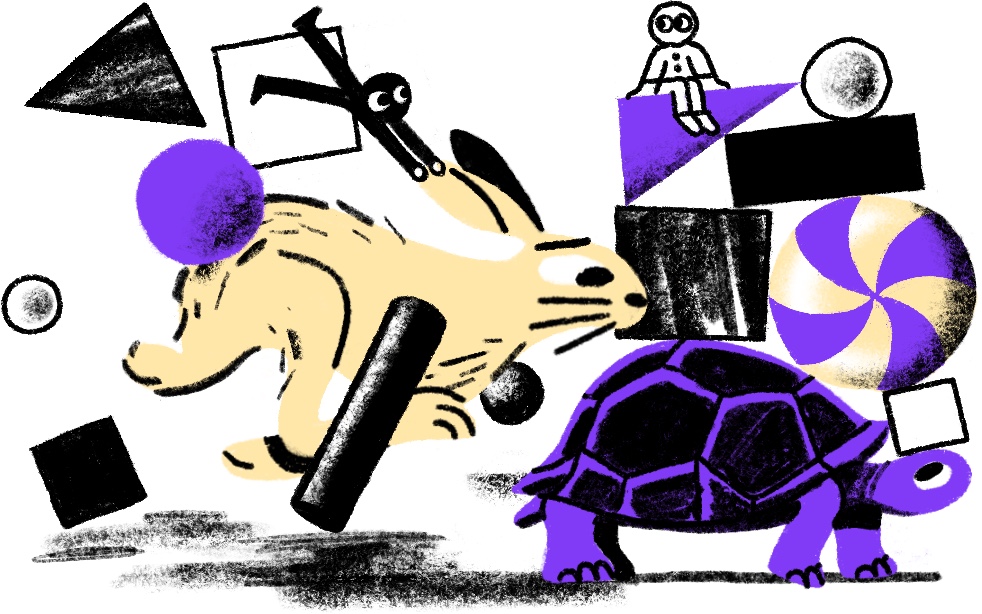 The relentless stream of productivity marketing tells us to go faster, to do more. We send and receive as many as 140 emails per day, on average, scrambling to get everything checked off, as quickly as we can. But this isn’t how people actually want to work. In reality, 61% of workers said they wanted to “slow down to get things right” while only 41%* wanted to “go fast to achieve more.” The divide was even starker among older workers. 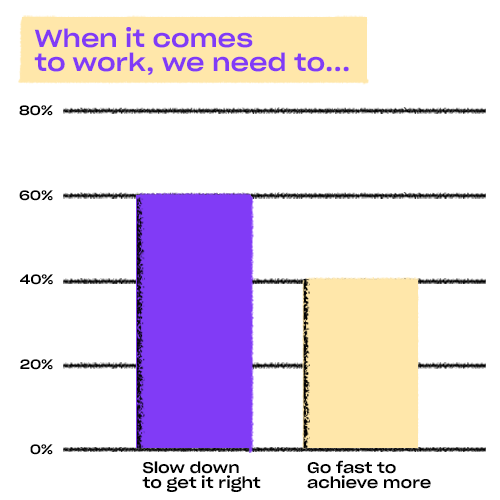 What’s more, 38% of respondents were outright uncomfortable with the idea of going fast to achieve more—the highest level of discomfort from among dozens of ideals we polled (ex: 19% were uncomfortable with “exerting authority”; 33% with “engaging coworkers just to get what I need”). By contrast, 76% valued “making sure work is done right” and 71% prioritized “quality of work.”

The preference for slowing down had also emerged as a theme in our original interviews. Take Ana, who works at a government agency in Brazil.

"We have to be all the time producing. I don't feel productive. I can't write and I can't work well. I feel like, "Oh my god, I'm a terrible person." No. People have feelings. People have parts of life that aren't just being producing. I think we have too much information, too many thoughts all at the same time. We have to slow down."

Anecdotally, when we polled our Twitter community in a closely related question, the results were similar to those of our nationally representative survey of US knowledge workers: about 60% said “doing one job right” was a bigger challenge than simply “getting more done.”

Lesson #2: Workers strongly value uninterrupted focus at work, but most will make an exception to help others

Staying in “flow” was a popular value in our initial interviews, and our survey results backed it up. Among all workers polled, 59% said they valued “making time for uninterrupted flow.” Older generations valued such focus even more highly (67% for Gen-X, 71% for Boomers).

Still, 55% of respondents said they valued “helping others, even if it means breaking my own flow” (about the same across all generations).

The results suggest we need to be more thoughtful about when we break our concentration, or ask others to do so. When people know they are helping others in a meaningful way, they tend to be okay with some distraction. But the busywork of meetings, alerts, and emails can quickly disrupt a person’s flow—one of the most important values we polled.

Modern technology hasn’t done a great job respecting this tension. Today’s most popular tools and ways of working overwhelmingly prioritize always-on communication, where you can reach a colleague at any time, on any day. Our research suggests workers want better balance here, with more opportunities to disconnect and recharge—or even just time to focus on a single task for an extended period.

Many of our interviewees reflected this sentiment, calling for a more thoughtful approach to worker time and availability. Charles, a designer at a mid-sized tech company in the UK, points out how everyone can help play a role in addressing this issue.

"I would imagine [a better way of working is] the idea of not working because you think working is something you have to do, so being able to look beyond the entrenched systems of work. Even saying, whilst I'm delivering this, why am I sitting in an office instead of at home? Why am I working nine till five? Why am I setting up meetings with people in Singapore when it's 10 o'clock for them?"

Lesson #3: Most workers have slightly more trust in people closest to the work, rather than people in upper management 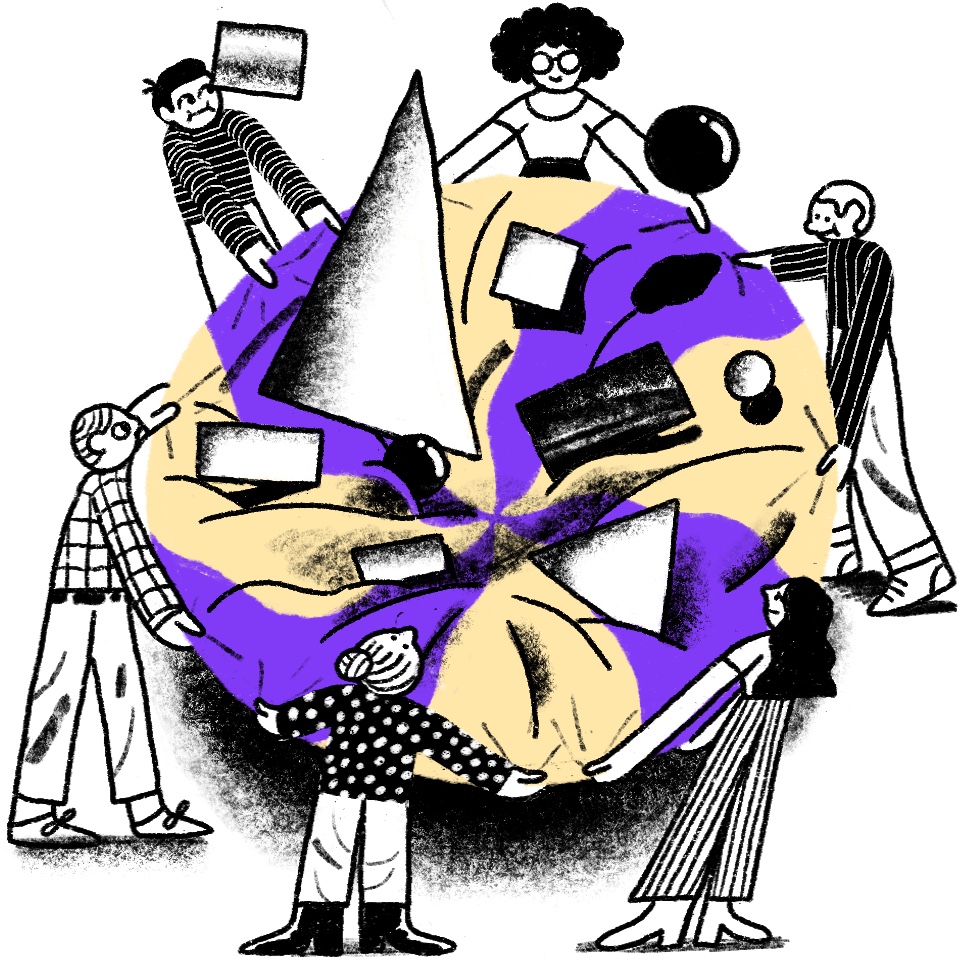 Over the past couple decades, we’ve seen information and processes at many organizations become less centralized. But there’s a tension here. How do companies maintain cohesive leadership while also experimenting with flatter structures and less hierarchy? With this question in mind, we asked workers who they trust most in the workplace.

Among all respondents, 53% trusted people “closest to the work,” while only 45% trusted “upper management.” You might assume that younger workers would be the most likely to trust peers over management, but in fact, the opposite was true. Millennials trusted those closest to the work only marginally more than upper management (49% vs. 45%), while the older workers were significantly more likely to favor the rank-and-file perspective (ex: 61% vs. 44% for Boomers). 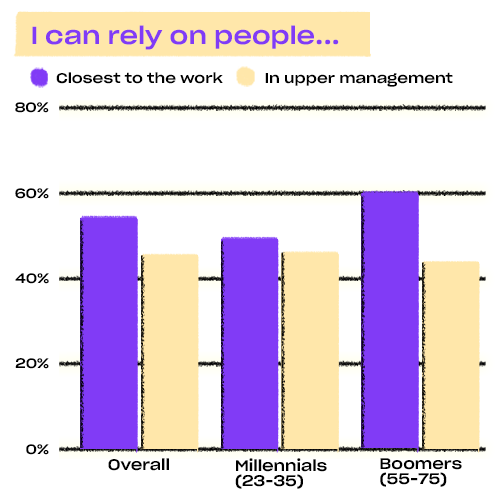 The findings here underscored a theme from our one-on-one interviews: workers tend to look to their rank-and-file colleagues when it comes to new tools or processes, while being more skeptical of solutions mandated from the top down. Moreover, workers with more career experience tend to feel this way even more strongly.

Cameron, a project manager at a mid-sized construction company in the US, captured this tension when describing the relationship between upper management and employees.

"It just seems like there's a big disconnect because you won't hear from our upper management in a very long time and then they'll call everyone together for a new org chart, but no one knew why or what they're doing. They think it's the best thing. It just gives the wrong message, I think, to everyone working under this ... I guess you look to upper management right? To lead and set expectations and rules and maybe some visions, I guess. It feels like there's a lack of vision. It's hard because it's a privately held company so they want you to buy stock in the company. I think it keeps people from buying stock when they don't feel like they understand the vision of the company." 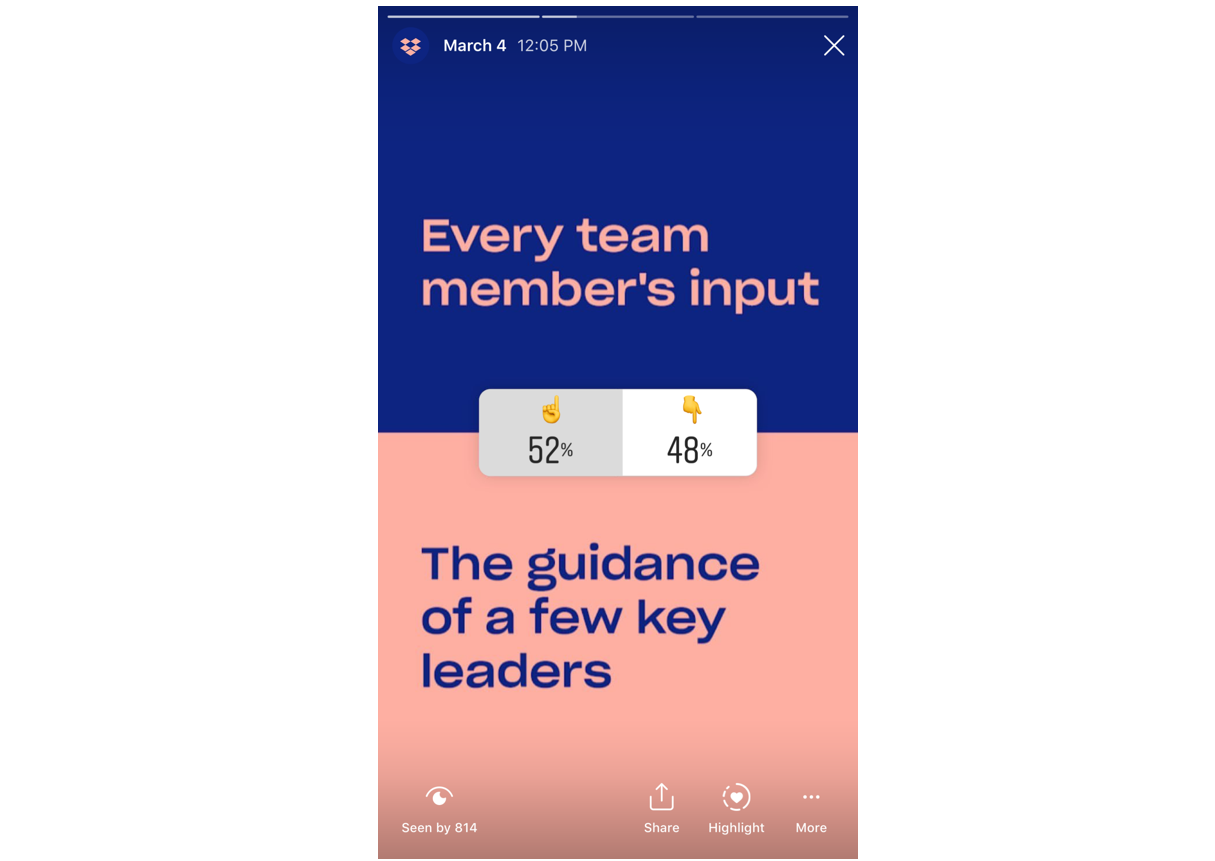 This disconnect—an instinct to look to upper management mixed with a general skepticism—seemed to show up in our anecdotal Instagram polling as well. Users were torn on relying on “every team member” versus “the guidance of a few key leaders.”

Lesson #4: Workers are torn between idealism and pragmatism

Most workers (58%) want to fix societal problems in the workplace, like racism, sexism, and homophobia. Still, 46% said they wanted to get their work done first, then turn to the bigger societal issues. This tension—between prioritizing wider societal problems or just getting the work done—was a consistent theme in both our one-on-one interviews and the wider survey.

Elizabeth, an attorney in the US, struggles with this tension in her day-to-day work. She describes how a former boss had come to expect certain tasks from her, possibly because of her gender.

"Not only was I an attorney, but also doing administrative stuff…and that’s not really part of my job title. I was helping [my boss] base label, or highlight things, or redact things in Adobe Acrobat. You can't bill for that. And so maybe it's a gender thing too, but I felt like I was expected to do secretarial things. And I don't know if that's a product of [my boss’s] age or him just being completely oblivious or what it was, but there's a lot of things there.”

Elizabeth was torn on how much she should have rejected those tasks on principal, versus quietly putting up with requests in order to get back to her core work more quickly.

It’s tempting to assume that addressing just one piece—like taking a stand on societal issues—will necessarily get in the way of the work itself. But our research suggests we can begin to solve the two in tandem, as more equality, inclusion, and diversity tends to come hand-in-hand with a healthier mindset about work. We’ll take a closer look at this in part three of the series.

The deeper question behind each of these issues is what’s at stake for workers when they try to navigate these tensions. When workers have to make a compromise between two competing values—like idealism vs. pragmatism—they experience tension. But when they can successfully navigate those tensions, they feel more fulfilled, more included, and more capable.

Our survey data suggests workers are still struggling with a variety of workplace tensions, and in many cases, burning out as they fail to navigate them. As discussed in part one of this series, doing more and going faster isn’t getting us any closer to the answer. Our research indicates the answers lie in a new paradigm of work—one that focuses more on meaningful work, and less on an outmoded quest for productivity.

As we’ll see in part three of this series, part of the solution is to give workers more flexibility, more agency, and more trust to work in ways that make sense for them.

*Methodology notes:  Survey was developed in partnership with research consulting firm August and conducted by Qualtrics. We asked respondents to rank their agreement across a range of values which were not mutually exclusive. Contrasting values such as“slow down to get things right” and “go fast to achieve more” do not necessarily add up to 100% because the choice was not binary. Survey included a nationally representative sample of 500 knowledge workers.