It was raining again. Normally, rain isn’t a big deal, but in the fictional neighborhood of Greener Grass—a new comedy at the 2019 Sundance Film Festival—rain isn’t supposed to exist. Fortunately, producer Natalie Metzger and her team were used to dealing with interruptions on the fly.

“We had these amazing, handcrafted paper decorations. Of course, paper doesn’t do well in rain. We also had a large group of extras…particularly, lots of kids.” she said. Crew members snapped to action, some covering the paper props, others leading the cast to a nearby shelter, still others making sure the kids stayed put and kept dry. “Oh, and there were dogs,” she added. “Yeah: it was an interesting scene.”

Surviving the chaos of independent filmmaking takes a talented, compatible team. It’s a lesson Natalie’s learned well thanks to a decade of writing, directing, and producing everything from TV commercials to shorts to feature films. We had a chance to chat with Natalie in advance of the Greener Grass premiere. How does she think about teamwork? What makes for a good director-producer pairing? And who are the unsung heroes of the film set? 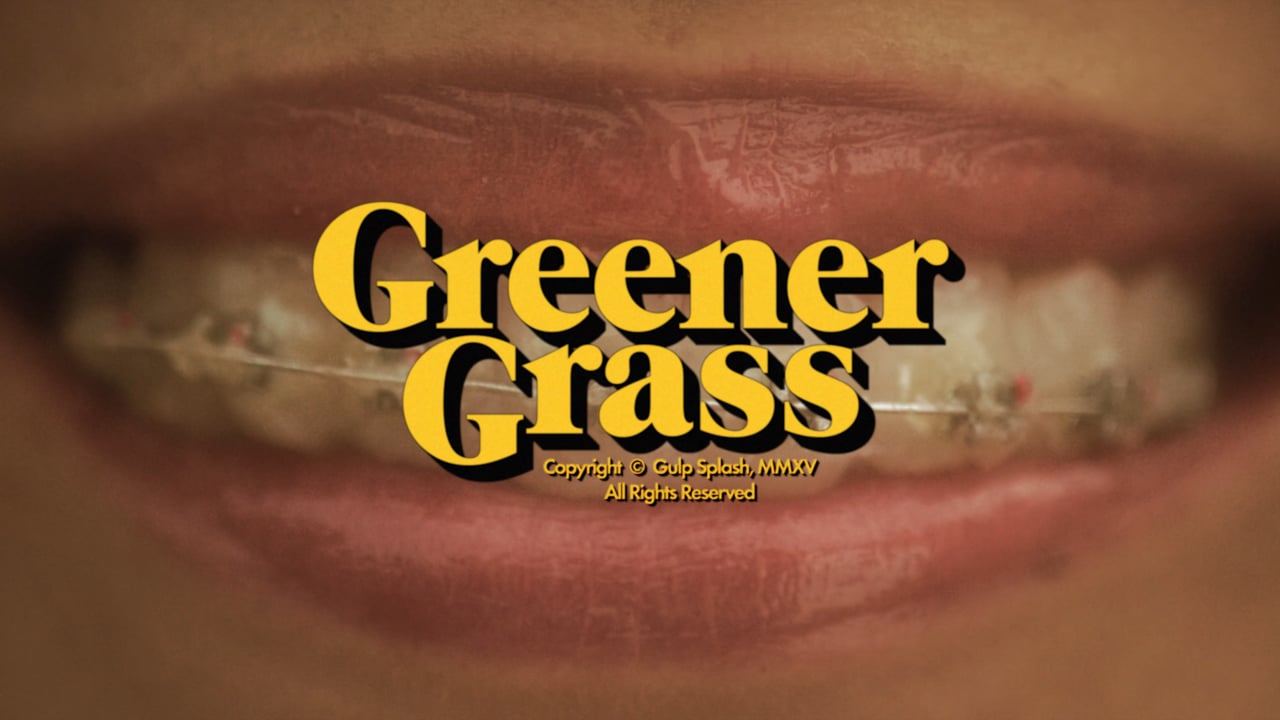 The original Greener Grass short film, starring Jocelyn DeBoer and Dawn Luebbe. The duo went on to write and direct the feature-length version, which will debut at the 2019 Sundance Film Festival.

After a series of roles all across the film set, Natalie found her best fit in the producer’s seat. “I do have that overly organized personality…potentially OCD. I really love spreadsheets. I genuinely like building budgets and doing cost reports and creating crew lists and all that stuff.” But, she says, all the organizational prowess in the world doesn’t mean much without a good relationship with the director. 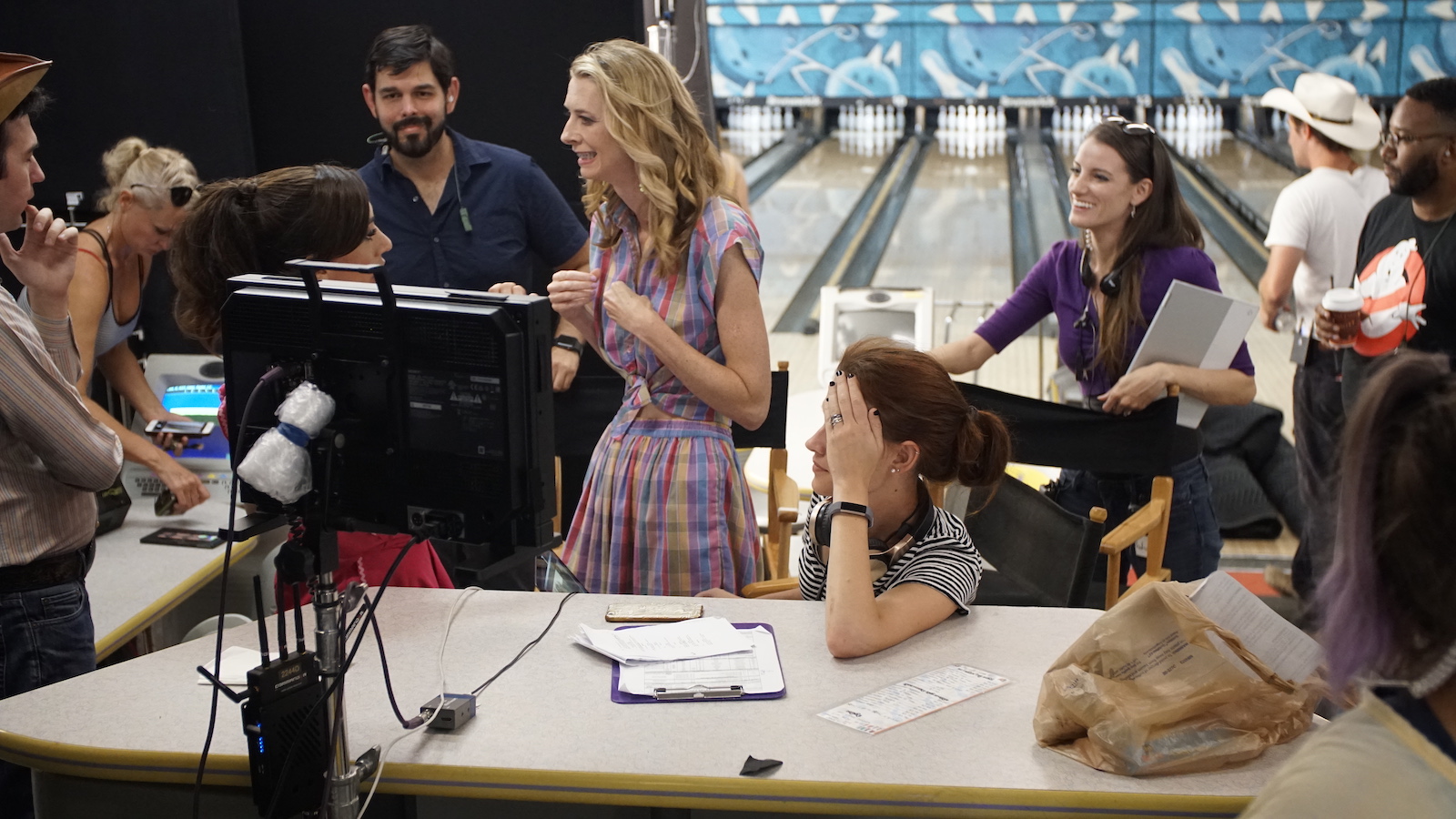 “First and foremost, make sure your personalities vibe,” she said, describing how she and directors will decide to work together. “It’s like you're marrying that person. They are your husband or wife for the length of the project and sometimes even afterwards. You see them for like 14 to 16 hours every day.”

Secondly, Natalie says directors and producers will ideally bring in a network of trusted crew members. Maybe the director knows a cinematographer who matches her style, while the producer can call a composer who loves working in that film’s genre. “It’s not necessary, but it always helps to have some of these connections.”

Finally, Natalie says, a good producer needs to understand the director’s tone and vision. It’s still on the producer to make tough calls about budget and staffing, but if she can weigh those calls against the director’s creative goals, she can suggest other options that maintain the spirit of the film. “’What about these other ideas?’ That’s one thing I always try to provide my directors. ‘Which one do you want to do?’”

Natalie says having a shared vision has been particularly important for both Greener Grass and the feature-length version of Thunder Road (released in 2018 after the short won a Grand Jury Prize at Sundance in 2016). The directors for each film also served as screenwriters and starring actors. “Having other people have eyes on the monitor when [the director] can’t is really important.” In these cases, it’s often up to the crew—whether it’s the cinematographer, producer, or someone else—to tell the director when he or she might need to reshoot a scene or rewrite some dialogue.

Behind the scenes on the set of Thunder Road. At left: Director, screenwriter, and lead actor Jim Cummings. 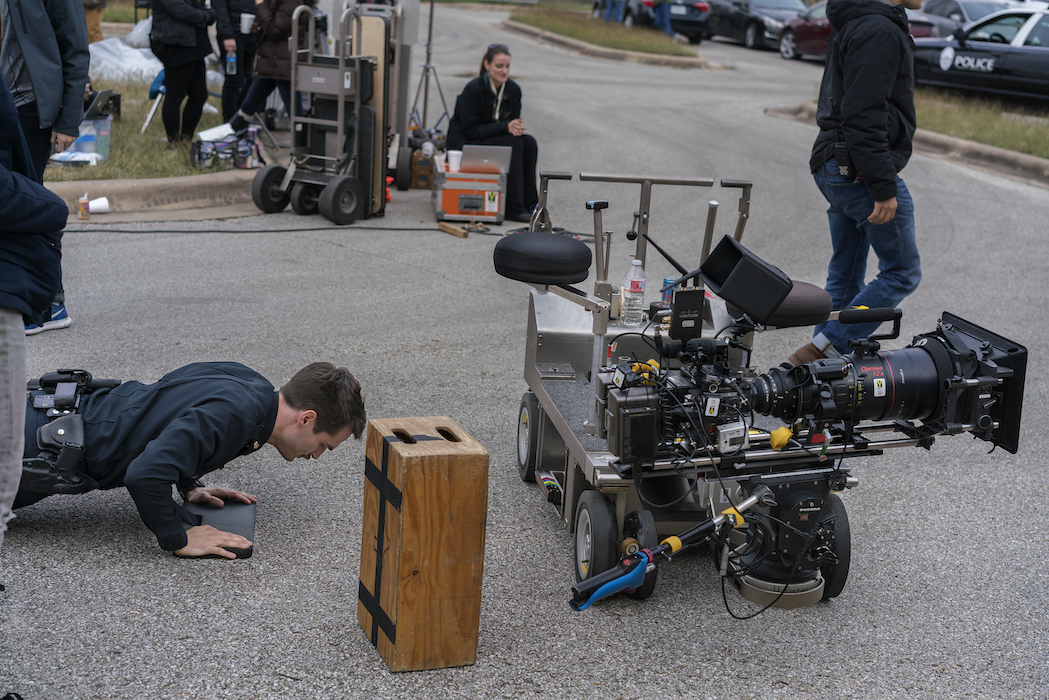 Movie fans tend to hear a lot about the big names behind their favorite movies, from the directors to the screenwriters to the A-list actors. But what about the dozens of other crew members that quietly help make the movie a success?

Natalie was quick to name a series of people that made her life so much easier on the set of Greener Grass. “Take Lauren Oppelt, our costume designer. The costumes for this film are so intricate and so specific. It’s such a hyper-stylized film.” Natalie described how the movie uses a very intentional, bright color palette to give viewers a sense of its idyllic, surreal world. “Each character is color-blocked. [Lauren] went above and beyond, hand-sewing many of the dresses that these characters wear.”

Those handcrafted paper decorations from the rain incident? That’s thanks to Kristin Gibler, the film’s art director, and Leigh Poindexter, the production designer. The man with an eye for capturing every scene perfectly, even while the directors are busy doing the acting? That’s Lowell A. Meyer, the film’s cinematographer.

When the creative process goes so well, Natalie says you keep going back to the same people, growing even more trust and comfort with your most frequent collaborators. “We’re slowly building up our family so we can continue working with the same people over and over again. It’s just lovely to create that rapport. When you’re on set, it feels like summer camp. You’re surrounded by these people you’ve grown to love and admire.”

Tying it all together

Both Thunder Road and Greener Grass began as short films and grew into full-length features. Natalie says this has made the experience of producing the features even more exciting. “I really like being a facilitator. You are helping facilitate the director’s vision, especially when that’s a really clear vision and a really unique vision. I often feel like a midwife where I’m helping this director, the mother of the film, bring their baby into the world.”

Greener Grass premieres at the Sundance Film Festival on Saturday, January 26th in the Egyptian Theatre.