Jefferson has built a decades-spanning career all from his love of skateboarding, basketball, and music.

The adage “Do what you love, and you’ll never work a day in your life” rings true for photographer Atiba Jefferson.

“I’m very lucky,” he says. “When I tell people I’m going skating for the day, that actually means I’m going to work.”

Skateboarding was actually Jefferson’s gateway into photography. Realizing he wasn’t “that good” at boarding turned out to be a gift. He picked up a camera and started taking photos of his friends’ rides and stunts, and became equally enamored with photography.

“It’s given me everything that I have now,” Jefferson says now of his first love. 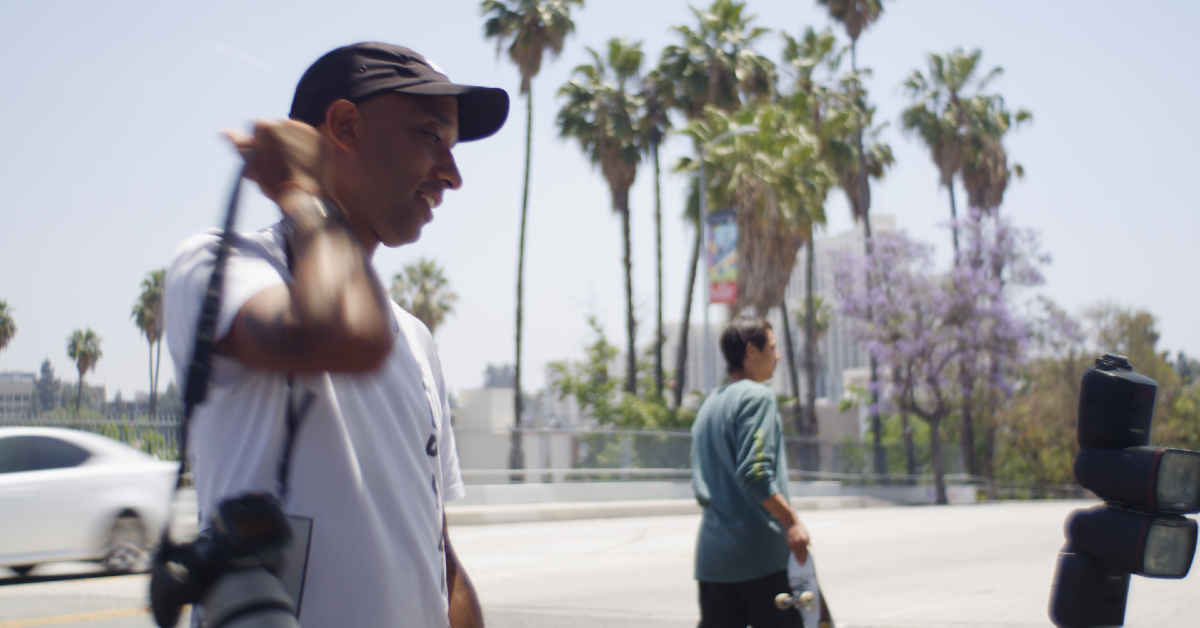 He was able to parlay his skateboarding photography into assisting the Los Angeles Lakers’ team photographer Andy Bernstein, which led him to shooting some of the biggest names in both sports and music.

And all of those images he’s created over the last 25 years live on his Dropbox. As he continues to follow his passions wherever they take him—a furniture line with Modernica and a backpack company just to name a few—Dropbox remains an integral tool in his process.

“It’s multiplied my creative time,” he explains. “I never really turn the switch off.”

Jefferson tells us more about how Dropbox helps him work and who his favorite people to collaborate with are.

What do you need to be creative?
For me, just being inspired—that is, just waking up and wanting to create. I can’t turn that off; I see photos I want to make when I open my eyes. But I also need a camera, computer, and with music, a keyboard.

Who is your favorite person to collaborate with and why?
I’m a staff photographer for Thrasher magazine, which I really love. Working for them has been the best job I’ve ever had; [it’s] like a family. Last year I shot a cover with 32 Black skaters for the cover. That was probably one of the proudest moments I’ve ever had as a skate photographer. Being Black and being able to put a spotlight on skaters that I was allowed to pick… Thrasher gave me this amazing opportunity to tell my story and direct it. That was probably the greatest thing I’ve ever done in skateboarding, I would say.

"Picking up a skateboard at 13 years old changed my life—that exposed me to so many different things in the world."

As a photographer it’s always great to work with Tony Hawk. The way he loves skateboarding is so pure still; he has everything and he still just wants to push himself. Kobe Bryant was always great; he was always into photo shoots [and] it was great to see his creative side. With music, Nosaj Thing and Jon Theodore are the best.

How has your relationship to work changed as we continue to navigate a pandemic?
I took the time to look at things that I want to do in the future. It also made me say yes to everything. Not knowing what the future holds, [I] live in the now.

How does Dropbox help you do your work?
Dropbox plays a huge role in my life—that kind of file sharing technology is something that has been a game changer for photographers. I used to spend all my life sending out film, actual negatives, to clients. Then it went from negatives to getting scans that you would have to send on a Zip drive. Then it went to CDRs. Once you were able to file share over the internet, it was a game changer. I mean, it gave me so much time in my life back. And that’s what’s amazing about Dropbox, [not just] sending the file, but having a safe place for your file. I say your files are like national treasures, and you want them to be protected and safe somewhere.

Another amazing thing about having access to my files always is that I can be on one job, get a call about a file from another job, and be able to share that instantaneously, directly from my phone. That’s what’s great about Dropbox: having that accessibility in communicating with multiple clients at all different times. When I go back and forth with an editor, when working on video and music, it becomes a collaborative tool.

What's a file that you've lost before you had Dropbox that you wish you could get back?
I have had cameras stolen that are replaceable, but the files are not. There’s nothing worse than being robbed, but even worse [is] when the thieves are stealing something that is not of value to them but so valuable to you. I [also] had a computer stolen that had music that I made on it. That hurt because it’s gone forever. If I had shared [that music] on Dropbox, I would still have it. Whenever I have important files, I upload [them] straight to my Dropbox for this reason.

You're someone who does many things very well. What advice would you give to someone who feels overwhelmed by the thought of being a multi-hyphenate creator?
Picking up a skateboard at 13 years old changed my life—that exposed me to so many different things in the world. And once I did that, I picked up a camera. I wasn’t that good at skateboarding, so I started taking pictures of my friends. And that led me to where I am now. I would say do what you love. It’s very basic [but] that will always keep you inspired and happy.

Responses have been edited for length and clarity