Making space to honor your process as a creative and as a human is key, he says.

It’s easy to believe that creativity comes effortlessly to an artist as accomplished as Geoff McFetridge.

His bold, minimalist paintings and illustrations feel like each organic shape flowed freely from his mind to his pencil to the canvas. And the client list for his design studio Champion Graphics is a who’s who of some of the biggest names in music, media, fashion, and design. (Hello, Death Cab for Cutie, Nike, Warby Parker, Patagonia, and The New York Times.)

But creating comes with its own angst and frustrations. That’s why McFetridge is incredibly intentional about how he works. He’s designed a process that makes space for both his and his art’s needs, for example, using Dropbox to keep his studio organized and going on a bike ride for two hours before heading into the studio to work.

“The best version of me is actually, like, a clear-headed version of myself,” McFetridge says. 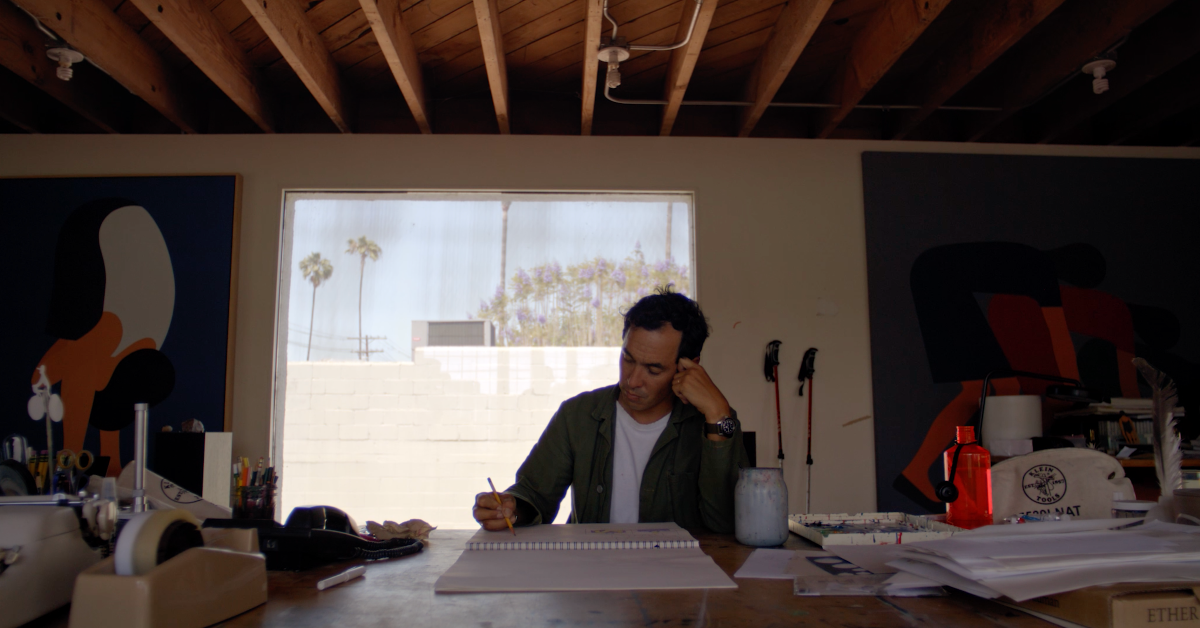 Sometimes that means going on a bike ride instead of doing 180 drawings, he says. “In life, I push back on what’s a waste of time.”

We asked McFetridge a few questions about how he creates, and the advice he has for anyone who, like him, juggles a lot of different things.

What do you need to be creative?
I like to make things while traveling. I really like being asked to do something. I like low expectations and high expectations. I like to have a really good set-up—like all my tools and an empty desk.

I also love to sit on the plane and do watercolors with my elbows pinned to my ribs. I really like doing versions of things. Versions of things [are] like having this huge head start. That feeling of improving on something rather than pulling something from thin air.

"...Being three dimensional as a human and having that as part of your creative practice… I think that is the stuff."

Who is your favorite person to collaborate with and why?
Andrew Paynter is a photographer who has been documenting me working for over a decade. Invariably, Andrew becomes involved in what I am working on as he is shooting, or I will work with him to shoot something unique. Usually he shoots while I am traveling for a show or a project. Those are my favorite types of experiences, being in unusual places making things.

Having those moments captured artfully on film is so special. I feel so lucky to have this archive.

How has your relationship to work changed as we continue to navigate living in a pandemic?
Every year for me is pretty different. These years have been really unstable. I have worked a lot, and I have made some things that I am really glad for. It does seem like each thing I do—each thing I make—gets dragged through a pretty deep psychic trench. Things have more reasons for being it seems.

How does Dropbox help you do your work?
A big part of my studio is that it is very open to the world. I partner with many brands and galleries and other creatives. A ton of what I make is shared or produced outside of the studio. I have been able to do this, with minimal employees (one), by choosing projects carefully and by really leaning hard on digital resources. Dropbox really fits in as the type of product I have gravitated to.

What's a file that you've lost before you had Dropbox, that you wish you could get back?
I have lost a lot of files over the years because my career has spanned many changes in [the] realm of digital art making.

I started doing design on a computer nearly right when they were being widely adopted for creative production. I recently transferred a ton of my digital archive to Dropbox. These were DVD and CD backups that I used to backup zips and SyQuests that were previously on tape drives and old computers. Graphic files were always overloading hard drives so you were throwing out or doing these overnight backups of files to make room to work.

I don’t feel any regret for lost digital files over the ages really. That feeling is saved for long emails that get deleted or forgetting to save something. Those regrets are really in the moment.

You're someone who does many things very well. What advice would you give to someone who feels overwhelmed by the thought of being a multi-hyphenate creator?
I love a compliment wrapped in a question. Thank you.

Obviously any one of us is happy to be good at one thing. My trick has really just been applying that one thing, that one highly articulate part of myself, to other stuff. What that other stuff is can be really interesting: wildlife tracking, sewing, parenting. Getting an A in logo design is made more interesting by your C in treehouse building.

You don’t have to be really good at everything you do, but being three dimensional as a human and having that as part of your creative practice… I think that is the stuff.

Maybe that gives someone anxiety too though. Hopefully not. My point is just value yourself, value things that maybe the world does not value in you. Being a creative person is often about self-assigning value to those things—those traits and interests.

Responses have been edited for length and clarity.