Subcultures need merch too, and Kyle Ng is all about collaborating with like-minded partners to make that happen.

Kyle Ng doesn’t do guilty pleasures. When he likes something, he goes all in and becomes that thing’s biggest champion.

“I’ve always really been interested with the idea of high and low brow—what it means to be high art and low art,” Ng says. “I think it’s cool to jam it together.”

That ethos powers Brain Dead, the counterculture lifestyle brand he co-founded with Ed Davis. The name is a clear nod to the company’s irreverence—everything about the brand signals that all synapses are firing.

Brain Dead collaborates with their partners to make merch for the subcultures they love. (Or as Ng puts it, “The lifestyle needs to be lived.”) That means Magic: The Gathering bucket hats and tote bags, futuristic rollerblades, and rock-climbing shoes, the proceeds of which go toward making the sport accessible to folks from marginalized communities. 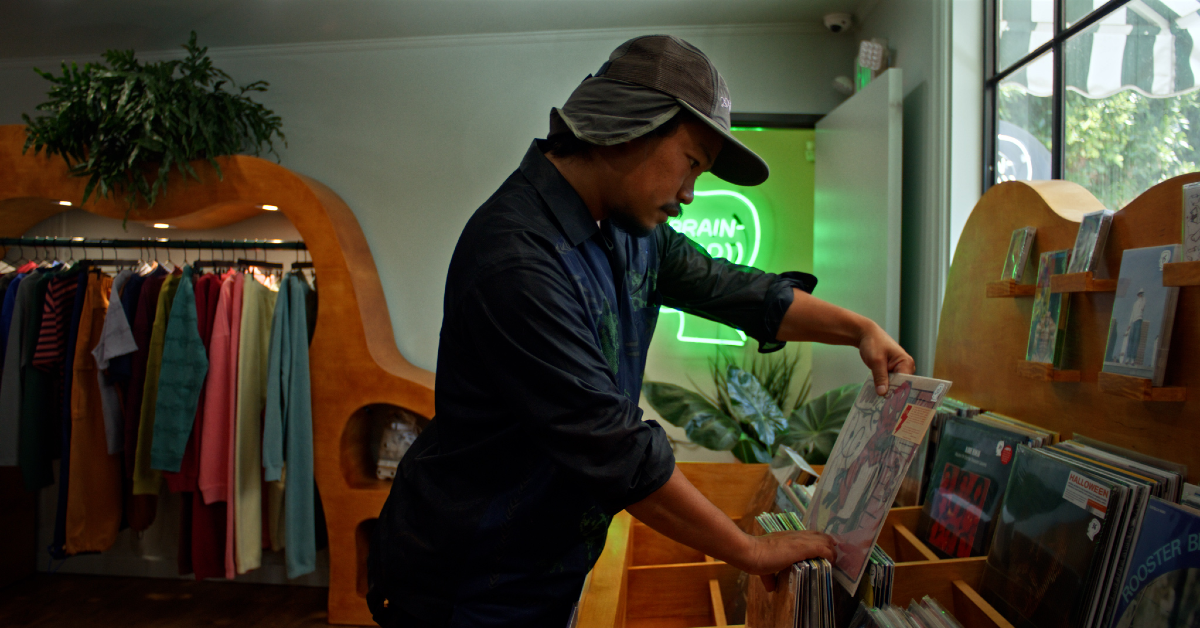 With so many seemingly disparate interests, Ng has made it a point to find a way to keep all of his ideas in one spot.

We talked to Ng about how he stays creative and where he gets his ability to “do a lot of things.”

What do you need to be creative?
To be creative, I need freedom to think and freedom to do my hobbies, my interests, and be active in the world. I think a lot of my stuff comes from my passion and inspiration comes from that. It's not based off of trying to copy something or money; it's really based off things that I want in my life and want to see in life.

People are so scared to do things…. And I think to me, it's better to try than not try at all.

How has your relationship to work changed as we continue to navigate living in a pandemic?
I have been way more interested in living life and having that inspire my work. All my work is just an extension of my passions and interests. Life is very precious and I really want to live the best I can.

How does Dropbox help you do your work?
I'm a very unorganized, messy person, and Dropbox is the place where I can keep all these ideas in one area without even losing it or misplacing it. To me, it's like this idea of the meta brain that we all wish we had where it's almost psychically connected to each other. You just have it on your laptop or computer or your phone, and you can access it any moment. At the same time, while I'm asleep, my partner in Australia could also drop off files in there, and then we'll have everything connected.

What's a file that you've lost before you had Dropbox, that you wish you could get back?
I think all the stuff I did with my first brand, Farm Tactics, was super important, but I never put them on Dropbox. I put them in hard drives, like a lazy disk. Then I would always drop the lazy disk [or] bring them on the bus or like, on my bike, and they'd always just get bashed up. [I] never had the files. Then [I’d] have to constantly recreate them—and that's definitely a pain in the ass.

So yeah, I think Dropbox is just such a crazy way where you can access [files] from anywhere. And no matter what bike or any transportation or any scenario, your files won't be corrupted.

What makes me, I guess, good at doing a lot of things is the ability to fail and not care so much. But also the idea of not being self-conscious of jumping into things that I don't feel like I'm a master at.

I think in life people are so scared to do things and be active in worlds or communities or activities that they don't think they would be great at and not even start working on it. And I think to me, it's better to try than not try at all.

Responses have been edited for length and clarity.