There’s a cliche joke about elevator music, found in seemingly every film ever made.

It goes something like this: A character, usually in the middle of a stressful situation, rushes into an elevator. The doors slide closed, and then the character waits awkwardly in the relative calm as chintzy music plays in the background. Maybe they hum along, or nod knowingly at another stranger in the elevator, as if to say ugh, mechanical conveyances, amirite? Doors open, frenetic action resumes.

The gag is officially listed on TV Tropes as The Elevator from Ipanema, referencing the most typical song used in such scenes, an instrumental version of “The Girl From Ipanema.” It’s one of those cliches that in the past ~40 years or so has eaten itself, gradually becoming so played-out that its usage became an ironic in-joke for the masses. The Wilhelm Scream of easy listening.

The premise is that elevator music is widely understood to be dull and annoying, and (hah!) its soothing ambiance offers a stark juxtaposition to whatever chaos is bookending a given scene, like say mobs of zombies gnashing their teeth or superheroes punching each other in sensitive areas.

That elevator music is cultural shorthand for blandness is perhaps unfair. Rewind a bit, and there’s actually a deeply fascinating history. It’s a story of technology completely altering the sound of public/private spaces; mid-century pseudoscience about boosting productivity with “designed” music; and controversial attempts at public brainwashing via the use of subliminal messaging.

Back in the 1900s, Major General George O. Squier, at the time working for the U.S. Signal Corps, developed Multiplex Telephony and Telegraphy — basically, allowing for the transmission of multiple audio signals via wires. It was one of a couple of his inventions at the time, which also include tech that turned trees into ersatz signal towers. Seriously. “It is not a joke nor a scientific curiosity,”

Scientific American reassured readers in 1919, “all trees, of all kinds and all heights, growing anywhere — are nature's own wireless towers and antenna combined.” Ironic that, about 100 years later, you can drive down the freeway and see in the distance cell towers disguised as trees. 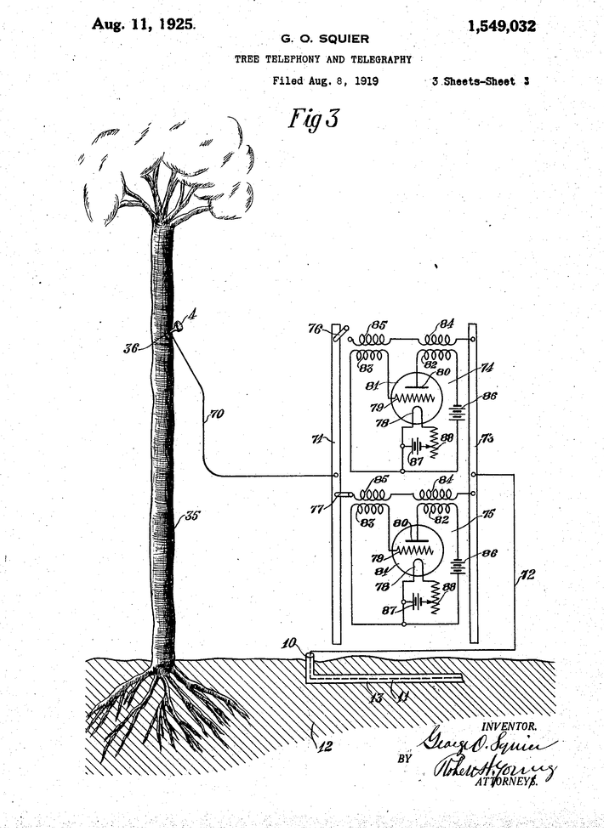 They commissioned “independent” studies, concluding that Muzak gave a 9.1% boost to productivity and could reduce typing errors 38.6%

Anyway, using his multiplex invention, Squier created the company Wired Radio in 1922. The idea for the company was to offer a subscription service that’d send music into people’s homes. It worked sort of like cable television. Music signals were sent over wires, and received by small boxes in people’s homes. Over a decade after its creation, he changed the name to Muzak, in an homage to Kodak. Shortly thereafter, he died (presumably unrelated).

Unfortunately, Muzak found it difficult to compete with the huge popularity of broadcast radio, so they moved into offices, hotel lobbies, malls, and — ah-hah — elevators. The idea was that they could make high-stress public areas more calming, through music. Since the speakers were usually hidden among decorative foliage, it became known as “potted palm” music. Squire apparently had a thing for greenery.

They also pitched workplaces, claiming that their music could boost productivity. Their marketing materials claimed that it’d reduce employee fatigue, and “petty grievances” would be forgotten. They commissioned “independent” studies, concluding that Muzak gave a 9.1% boost to productivity and could reduce typing errors 38.6%. “[Workers] used to drag when they came on for their ten-hour shift,” said an Employee Union President. “Now they practically dance up to their machines.”

Since Muzak didn’t own rights to any recorded music, the company hired bands to record originals. A few of those involved in the recordings were actually notable, like Fats Waller, Xavier Cugot, and Casper “World’s Hottest Harpist” Reardon. A gig’s a gig, y’know?

Oddly enough, one of the first bands they hired was the National Fascist Militia Band. They were an Italian brass band, who played such populist favorites as “To Arms” and “March on Rome.” Yikes. To avoid upsetting audiences, they changed the name of the band to the Pan American Brass band. The dark fascist overtones remained, and rather unsettlingly, were a hit.

Over the years, a trademark Muzak sound developed. Basically, jazz and big band music with all the edges sanded off. Think, lots of strings and horns. Think, showcases on the Price Is Right revealing brand new cars, and peppy ‘50s PSAs about the miracles of asbestos. Though bland, it’s worth marveling at the sounds’ inherent paradox: It is designed to be ignored, but simultaneously must also inspire the listener to work harder. According to one Muzak executive who was probably not intending to sound sinister, “Once people start listening, they stop working.”

Because of their brilliant marketing and/or because the style of music struck a (soft, unobtrusive) chord with the American public, Muzak was a success. It was played in the White House and on Apollo 11. The brand name was popular enough to become genericized, a lowercase catch-all term for its sound. That is, Muzak became muzac. And the sound of public/private life was forever changed.

Throughout the next couple of decades, Muzak’s success leaned heavily on the notion that their music could boost productivity. They eventually developed Stimulus Progression, music scientifically composed to increase productivity, released as a series of albums starting in 1974. The music plays in 15-minute segments, during which the tempo and volume gradually increases. After it climaxes at the end of a segment, it’s followed by a 15-minute silent period, meant to give listeners a break. Repeat forever. 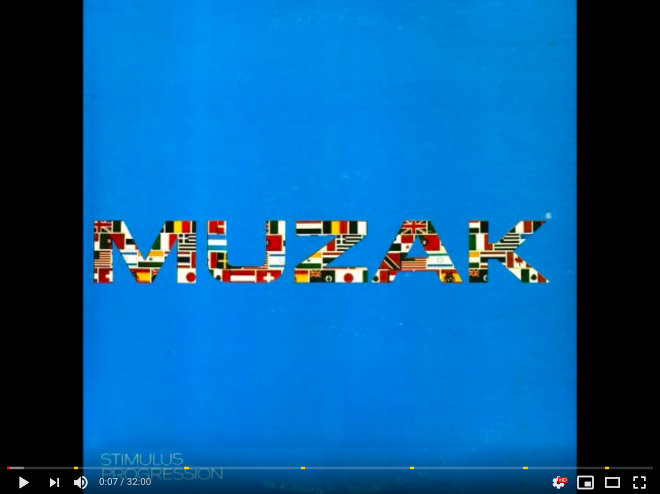 A study published in the Journal of Marketing found that slow-tempo music increased sales 38.2% compared to fast-tempo music.

Perhaps inspired by the success of Muzak, another, creepier company tried to encroach on their market. According to a piece in Time, in 1979, department stores around the U.S. began utilizing a black box developed by Behavioral Engineering Center to pipe music over store sound systems that repeated hidden messages 9,000 times per hour.

The content of the messages varied. Some were intended to dissuade shoplifters, repeating, “I am honest, I will not steal.” A real estate office in Toronto, meanwhile, tried to encourage employees with, “I love real estate. I will prospect for new listings for clients each and every day.”

The black box’s creator, Hal C. Becker, envisioned a utopian future built on subliminal messages. “I see no reason why there won't be audio-conditioning in the same way we now have air conditioning,” Becker told Time. "We could eliminate weight problems in one generation, reduce auto insurance by 50%."

It’s worth noting that Devo’s Mark Mothersbaugh, when doing commercial work, would often hide subliminal messages in the ads that countered the pitch they were serving. In a 1987 Hawaiian Punch commercial, for example, he hid the message “Sugar is bad for you.”

Supposedly—with a lot of emphasis on that supposedly—the black boxes cut down on thefts at one store 37%, saving $600,000. The specific store was never named, and the study’s details are hard to come by. Lost? Shredded? Non-existent? Who knows.

Can the use of music actually boost productivity? Like, if one needed to write, say, a meandering essay about an outmoded style of music at an above-average pace, could listening to something like Stimulus Progression help? Anecdotally, yeah, sort of.

Empirically, it’s a little trickier to confirm, as things involving human subjectivity tend to be. Though the studies cited by Muzak and Behavior Engineering Center ooze of mid-century pseudoscience, there are others that are perhaps more convincing. Here, look:

So whether or not Stimulus Progression or subliminal message black boxes specifically are audio snake oil is a tricky question to answer definitively. At the very least, numerous studies do back up the fact that music can influence mood and behavior (which, no duh, right?). The kind of music that achieves this effect seems at the very least subjective/contextual. It depends on what’s playing, who’s listening, why they’re listening, where they are, if they’re hungry, and on and on in an infinity of variables.

It would seem that if one is looking to find something to listen to that might help them work harder/better/faster/stronger, it should be whatever music they find makes them feel comfortable. Though it might help if it isn’t too distracting.

Over the decades, Muzak faded from prominence. Tastes changed. The muzak sound became so pervasive that it became a cliché joke.

Technology changed, too. Suddenly, businesses and workplaces didn’t require a corporation to provide a box to play music in their store. They didn’t need a radio, either. They could just insert a CD or cassette tape or now, click “play” on a personal Spotify playlist, and have their own customized experience.

Though Muzak eventually went bankrupt, its legacy remains. It normalized listening to music at work, and forever changed the sounds of our public spaces. Now, all music is muzak. Rather than stick to a regimented genre, stores hire consulting companies to choose songs that fit the moods of their stores. Whenever you hear Katy Perry blasting over some tinny overhead speaker while you shop for dandruff shampoo, you have a dead Army general to thank.

And weirdly, the Muzak “sound” has taken on a nostalgic glow. Look at the popularity of the K-Mart tapes, or the entire vaporwave genre, which is basically warped infomercial interstitial music. Maybe it wasn’t so bad, after all.

Meanwhile, a new kind of “productivity music” has largely taken over, in the form of binaural beats. For those unfamiliar, it’s basically two different tones played dichotically, creating the illusion of a third tone. Supposedly, this can stimulate the brain, allowing for better focus/sleep/super intelligence. It has also created an incredible new genre of YouTube thumbnail art that looks sort of like ’60s acid paintings mixed with the 3D demonstrations seen in commercials for OTC pain relievers. But various studies haven’t really confirmed the legitimacy of such claims. But if you like them, of course, it doesn’t hurt to listen...

Ultimately, I wonder if some of the muzak hate wasn’t primarily due to its sound, but rather gradually developed as a natural side-effect of its intended purpose. That is, the situations it was designed to soothe—sterile shopping environments, claustrophobic elevators, stressful workplaces, etc.—were so radioactive that they destroyed all public perceptions of the music itself.

Perhaps no array of sounds can be powerful enough to soothe the dull horrors of modern life. Maybe this indicates the folly of attempting to band-aid such environments retroactively with things like muzak. Instead, we must design them better from the start.

Learn more about all the productivity tools in Dropbox.