Making creative work is often misunderstood. In popular culture, it’s often viewed as a floaty, magical process, in which an idealistic weirdo waits around their house all day for “inspiration” to strike.

They’re usually in a paint-stained smock, because creative people can’t do their laundry. Also, they’re jerks to everyone they know, because you can only do good work if you’re a cold-hearted monster.

It’s easy to poke holes in these popular perceptions, and we all should. And yet, doing creative work remains an enigmatic process. Not surprisingly, either: It’s hard to come up with new ideas, especially those that are challenging and innovative. It’s even harder to see those ideas through to completion. Ultimately, many people begin to understand creativity as something only available to those with innate skillsets. You either have it or you don’t.

This is unfortunate, when one considers the many brilliant ideas lost because someone simply lacked the confidence to try. It’s also misguided, because based on a number of studies on the matter, it turns out working successfully in a creative field isn’t strictly about innate talent. There’s an actual process that many creative people follow, whether intentionally or not, that allows them to create.

This notion was popularized by a comedian, actor, and Monty Python member John Cleese at a talk he gave at the Hotel Grosvenor House in London in 1991. Footage of that talk went viral online roughly two decades later. If you haven’t seen it yet, check it out here.

The full lecture is about 35 minutes long, and worth watching. The gist is that most successful creative people are good at getting themselves into a “mood” that allows them to come up with new ideas. This mood, described as an “open” mode, allows one to explore new ideas, even if they don’t seem to have any practical purpose. It’s where we allow ourselves to think, indulge in odd curiosities, and experiment without judgement.

This contrasts with a “closed” mode, which is what most of us are in most of the time. To get through an average day in modern society requires it. It’s a mode where creativity is not possible. It often involves high stress or anxiety, practicality, seriousness, and the ability to focus on a single goal to completion. 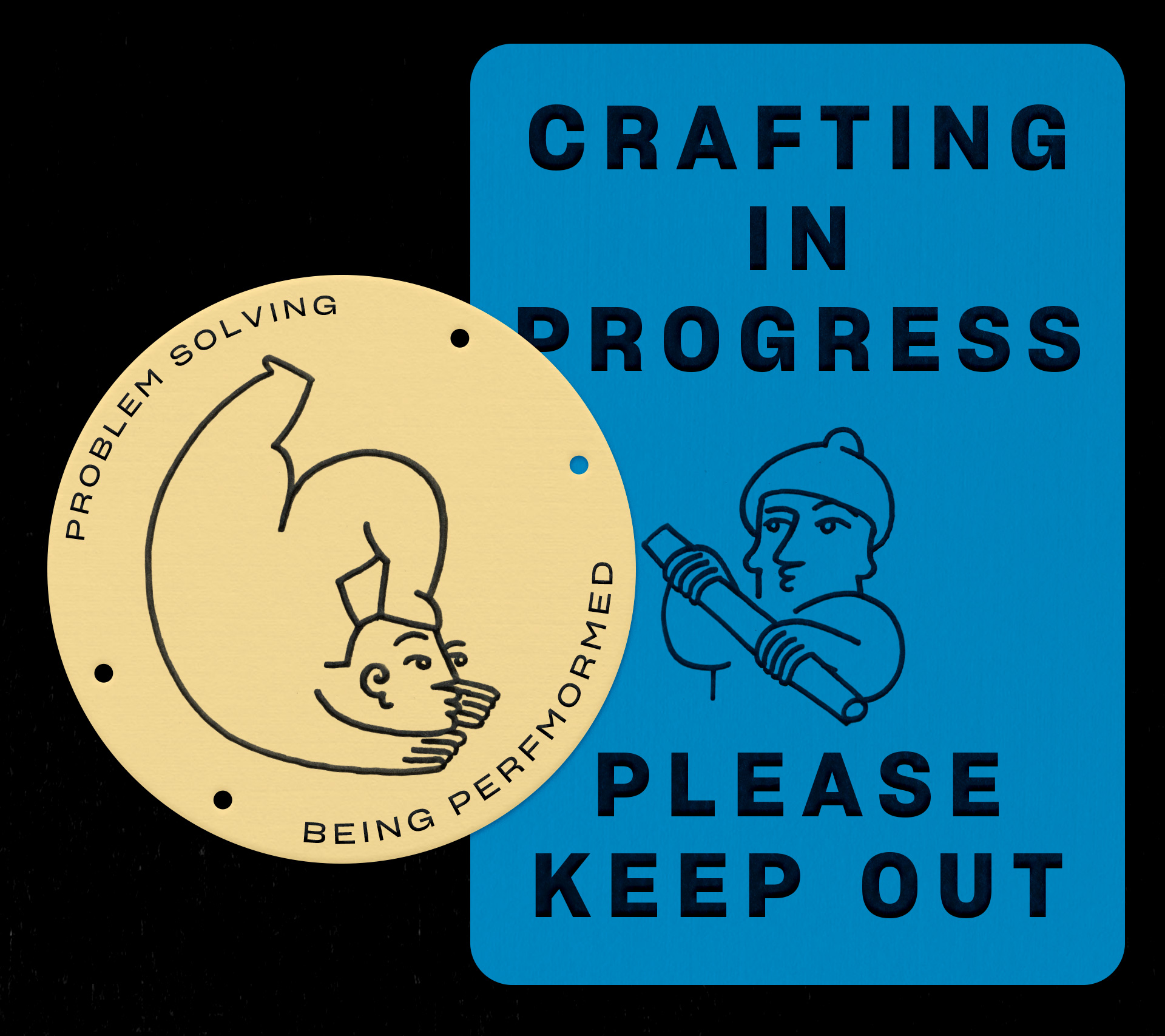 Both modes are important. If we spend too much time in an open mode, we’ll never get anything done. Conversely, getting stuck in a closed mode will result in a lot of dull busy work that pleases nobody. The trick, then, is learning how to manage these two ways of thinking to one’s advantage.

The closed mode is sort of like default human programming, at least in our society. It’s entering the open mode that’s difficult, and requires the most effort.

To paraphrase, the talk outlines five steps to reach it:

First, it’s important to create an “oasis of quiet” where you can wall yourself off from the immediate pressures of day-to-day life, sit down, and think about whatever.

Next, you must enter this space with a clearly designated start/stop time. The “play” that occurs in an open mode requires being free from worrying about when to begin or end. Around an hour and a half, about 2-3 times per week, is recommended. Any more than that, and one is likely to get tired. Any less, and we won’t really have enough time to transition out of the closed mode and actually do some real thinking.

Don’t worry, this isn’t a negligent redundancy, just a different interpretation of time, perhaps best described as resilience. Most successful creative people are willing to “play with problems longer” even if it’s uncomfortable. The ability to sit with the discomfort of not having solved a problem means that one is less likely to come up with easy, cheap answers, and can dig deeper, finding the most interesting and unexpected solutions.

The fear of messing up will destroy creativity. That’s why it’s important to indulge in any idea, no matter how ostensibly stupid. Play with notions of “what if” without worrying about failing. Nothing can be wrong in an open mode. As Alan Watts says, “You can’t be spontaneous within reason.”

One of the quickest ways to leave a closed mode is through humor. Laughter is a form of relaxation, and humor is inherently playful. We should be concerned when “serious” contexts — say, important business meetings, political discourse — don’t allow for humor, as this will likely stifle creativity, and limit original solutions.Additionally, it helps to work with another person, so long as they don’t make you feel defensive or shy. The more the merrier, depending on the size of the room.

In other words, if you want creative people to do good work, leave them alone.

When you leave the open mode, it’s important to work hard to complete the ideas that were generated. Once they’re done, you can reconsider them in the open mode to see if they work, and then repeat the process, as necessary, until the work is completed, awards are won, TV interviews occur, men in cheap suits ring your doorbell while holding balloons and large novelty-sized checks, etc.

Of course, rigorously following these steps doesn’t guarantee that something creative will happen, but just that it will be more likely. The important thing is that to create good ideas you need to free yourself of the expectation to create good ideas. Maybe this sounds like an annoying zen koan, but hey, no judgement of bad ideas, right?

The creative method described above isn’t just based on anecdotal evidence. It’s based on a series of scientific studies that took place in Berkeley in the late ‘50s/early ‘60s.

Psychology professor Dr. Donald MacKinnon, director of the Institute of Personality Assessment and Research (IPAR), was curious about how the minds of creative people worked. So he conducted various studies, attempting to determine the motivations and environmental conditions for making a person creative, researching top achievers in fields like science and literature.

Perhaps his most famous study, conducted in 1959, focused on architects. MacKinnon invited 64 of the best architects in the world to fly to Berkeley to take a series of personality tests. Forty responded, including Pietro Belluschi, John Johansen, Philip Johnson, Louis Kahn, and George Nelson. They became “Group I,” and were joined by an additional 84 “lesser-accomplished” architects, forming two other groups. Membership in the latter groups probably felt a little insulting, but hey, it’s for the greater good, right?

The architects flew out to Berkeley, staying at the opulent Claremont Hotel. They spent the weekend in an old fraternity house, where IPAR researches asked them to fill out a number of exercises, grilled them on their creative process, discussed their childhoods, and conducted a number of tests. Ultimately, among the more successful group, a pattern developed in their processes for getting worked done. And go figure, they all seemed to utilize the steps outlined above.

MacKinnon later summed up his conclusions in a paper, “Identification and Development of Creative Abilities” (1964). He wrote:

“What I am suggesting is that creativity is a process which has a time dimension, and which involves originality, adaptiveness, and realization. It may be brief as in the jam session of a jazz band or it may involve a considerable span of years as was required for Darwin's creation of the theory of evolution”

In other words: if you want creative people to do good work, leave them alone.

This all likely makes total sense to anyone who has ever tried to make anything, or maybe completed some janky online personality quiz to find out if they were an introvert. The main problem is the main components of this kind of technique—the desperate need for time and space—are something of a luxury in the always-on business/tech world. How can an organization innovate with new ideas when the demands of a competitive industry seem to keep people stuck in “closed” modes?

To get a better understanding of the ways in which a company might try to foster the kinds of creative thinking that MacKinnon et. al. recommend, we spoke with Collin Whitehead, head of the Brand Studio team at Dropbox. The team is sort of a jack/master of all trades, responsible for managing how the voice/tone/aesthetic of the Dropbox brand is expressed. Whitehead echoed many of the important points above.“I have a fundamental belief that what creatives need most are time and space—an oasis to make their best work,” he says. “We really try in the early phases to allow ourselves the time to explore, and fail.”

This exploration—and willingness to fail—is necessary for coming up with new ideas. “I think one of the most important things you do in that phase is find the bounding box of when things stop working, to know what will work,” explains Whitehead. “I think it’s really important to find those edges.” In other words, if a project must be scrapped because it doesn’t work, so be it. Consider it a lesson so that the next thing can be even better.

Also, the notion that creativity isn’t an exclusive skillset—that everyone in an organization, no matter their expertise, can offer crucial insights that can help push a project forward in unexpected ways—is something imbued within the company’s DNA. “One thing we do differently inside Dropbox is we work very transparently, so we allow our creative documents to be public to the company,” says Whitehead. “It goes back to [the idea that] everyone is creative and everyone has something to contribute there, in whatever their craft is, whether they’re an accountant or director, and it’s really about creative problem solving.”

The company’s redesign, introduced in 2017, utilizes disharmonious color combinations. It seems to indulge in the notion that creativity flourishes when people are willing to be comfortable with feelings of dissonance. The extra bit of cognitive load required to process the unfamiliar color combinations can actually help push people to generate ideas.

Crucially, it’s important to know when to leave the open mode and start working on an idea. “Moving from ideation to execution is a really pivotal moment. We try to be really intentional about when we leave those phases,” says Whitehead. “We’ve definitely been burned by spending way too much time in the exploration phase, and not leaving ourselves enough time to execute the level of craft we’d like, and having to scramble and make compromises.”

So maybe, ultimately, it’s all about balance. Give people enough time and space, and make sure they have the right tools to get things done, allow for humor and minimize the risks of potential failure, and creativity will flourish.

But perhaps the most inspiring thing about all of this is that it’s an optimistic view of creativity. It remains accessible to everyone — not just those with a particular skillset or talent, but rather, those willing to do the work. Or, depending on what mode they’re in, to not work.